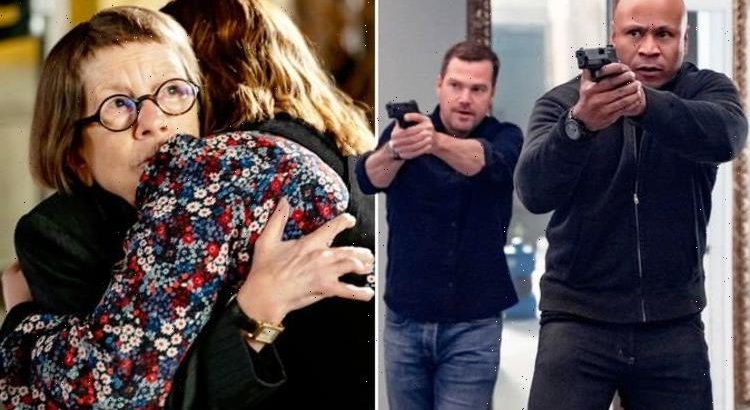 The 13th season of NCIS: Los Angeles has a number of loose ends to tie up after season 12’s bittersweet finale. With Nell (Renee Felice Smith) and Eric Beale (Barrett Foa) moving on to pastures new and the uncertainty surrounding Hetty’s (Linda Hunt) future still lingering, CBS viewers have to wait until October 10 to see the likes of Marty Deeks (Eric Christian Olsen) and Kensi Blye (Daniela Ruah) back in action. However, this hasn’t stopped members of the crew from shedding light on what’s to come, including the latest update from the show’s production manager regarding episode three.

The cast and crew of NCIS: LA have been regularly updating fans with how filming has been going after returning to work amid ongoing strict Covid guidelines.

Devon Roundtree star Caleb Castille shared a hilarious montage of clips from the Los Angeles-based set on his Instagram, while Fatima Namazi actor Medalion Rahimi showed fans what it would look like if her character stepped into Hetty’s shoes.

However, in Tunell’s latest update, he provided some more specific details on exactly how production was going, with filming now commencing on episode three.

Not only did Tunell share a snap from the filming location for the episode, set by an eery lake, but he also revealed the episode title for the third instalment.

He followed this up by revealing its episode title: “‘Indentured’. Day#2. #ncisla #bestcrewinhollywood.”

The snap attached shows a sign pointing towards the set’s catering department while a number of rowing boats laid unused behind.

And inevitably, it didn’t take long for NCIS: LA fans to respond to the news, with many expressing their excitement following the new bit of info.

“And we have a name [smile emoji],” one fan tweeted alongside a retweet of Tunell’s post.

“CANNOT WAITTT,” added a second who expressed their excitement at the news.

While a third made a joke about the catering sign in the photo: “But first…breakfast!!! #NCISLA.”

What exactly happens in episode three of the 13th season remains a mystery with the episode title the first spoiler dropped about it.

However, this isn’t the only time Tunell has given fans a unique peek behind the scenes of the upcoming season.

On July 24, Tunell confirmed filming on the season 13 premiere had wrapped – and teased a “condemned” water station could play host to the show’s stars.

Tunell shared a snap of a warning sign with the words “Pacific West Water Station. Warning. Imminent Hazard” written across.

Could this spell danger for Callen (Chris O’Donnell), Sam Hanna (LL Cool J) or another member of the team if they come in close contact with the doomed location in the season opener?

Fans have a little while to wait before they find out but there is some good news for those who tune into the entire NCIS franchise.

NCIS and new spin-off NCIS: Hawaii both premiere on the same evening a few weeks before NCIS: LA arrives.

NCIS: Los Angeles season 13 premieres on CBS in the USA on Sunday, October 10.