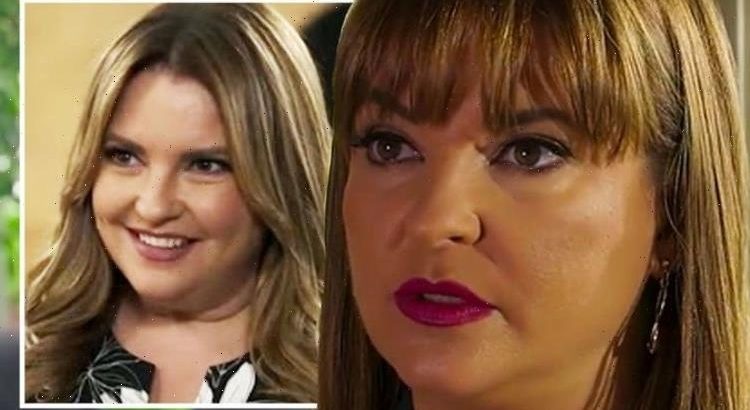 Rebekah is taking centre stage as her character Terese in the last episode of Neighbours airing before the Christmas break. The beloved Lassiters Hotel manager has had a turbulent few months, having turned back to the bottle following the breakdown of her marriage to Paul Robinson (played by Stefan Dennis). As the Channel 5 soap takes a three-week break, the Ramsay Street resident will be left fearing for her life and many viewers will be questioning whether the actress who plays her will be leaving the show.

There has been no official comment from the show or Rebekah herself as to whether she will be leaving the weekday serial drama.

The cliffhanger has been implemented to ensure fans will watch the show when it returns in January when they will get the answers to their questions.

Speaking ahead of the festive episode airing, the actress teased this could be the end for her troubled alter-ego.

Rebekah said: “Terese isn’t even trying to keep her drinking under control at the moment.

“She seems to have surrendered to her addiction,” she told WhatToWatch.

If this is the end for the beloved character, it will bring an end to the soap star’s eight-year stint as the hotel manager.

What happens to Terese Willis in the Neighbours Christmas finale?

As Christmas Day dawns on Ramsay Street, most of the residents will be enjoying the festivities with their loved ones.

Unfortunately for Terese, she will be all alone as her family spend time with their other halves or take a break from life in Erinsborough.

Not wanting to feel the pain of being on her own, the beloved character turns to the bottle and ends up wandering on to the roof of the Lassiters hotel.

It’s not too long before she is joined by her step-granddaughter Harlow Robinson (Jemma Donovan), who has been investigating Glen Donnelly (Richard Huggett).

The latter is Paul’s half-brother, who only returned to the show a few weeks ago following a 30-year absence.

Terese has surrendered to her addiction

Terese and Glen have got close since his return and it seems there has been chemistry between them, but Harlow has been very sceptical of him.

Showing her loyalty to her grandfather Paul, she will have hired a private investigator to dig up some dirt on her long-lost great-uncle.

She presents the evidence to the drunk character on the roof of the hotel but as the women clash, Harlow feels she is not being listened to.

The youngster throws the papers at Terese and storms off, which is at the wrong moment as her step-grandmother loses her balance.

Viewers will see Terese hanging onto the building for dear life and she will stay there for three weeks until the show returns.

Speaking of filming the scenes, Rebekah said: “Without spoiling the illusion, we had platforms and scaffolding in place so it was very safe.

“But it was also incredibly windy, hence the crazy hair,” she told WhatToWatch, adding it is similar to how Glen made his departure from the show.

Over 30 years ago, he was left clinging to the roof of the hotel when his rivalry with Paul reached a dramatic conclusion.

Unlike Terese, he didn’t hold on and fell to the ground, leading to a misdiagnosis of paralysis which he has spent years in rehab trying to overcome.

It has not yet been revealed in upcoming soap spoilers whether Terese will feature in upcoming scenes or if this is the end.

The scenes have already aired in Australia as the finale was broadcast on Thursday evening, meaning for the first time in 18 months, the episodes Down Under and in the UK will air on the same day when it returns in January.

Taking to Twitter, viewers were sharing their thoughts on the cliffhanger, with Catarina stating: “No! Nothing bad must happen to our queen.”

“Oh nooooooo! Terese #Neighbours #AusPace,” Hosanna commented but will she be ok or is this the last viewers will see of the beloved character?