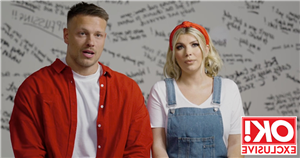 Olivia Bowen has admitted that she will be "more nervous than usual" to post online when her baby is born due to new parents being judged.

Love Island stars Olivia, 28, and Alex Bowen, 30, who revealed back on New Year's Day this year they are expecting their first child, have revealed that they received negative comments the minute they announced they were having a baby.

The couple, who have now joined C&G baby club #LoveDontJudge campaign to end parental judgement before it starts, have even been judged for their career choices since sharing their baby news.

Speaking exclusively to OK! about whether it has made them nervous to post online, especially when their baby arrives, Olivia admitted: "I know that having a baby I'm going to be judged for whatever I do.

"I’ve seen so many parents being judged for silly things like giving their baby a dummy or not. I think I will be a little more nervous than usual to post things when the baby is here for this reason."

Remaining positive, Olivia added: "But at the end of the day, we’ll be learning on the job which Alex always reminds me and we will make mistakes but we will learn as we go."

The reality star also revealed that she wants to give their baby "as much privacy in the first few months" and admitted that she is "terrified" over how many scary people are out there.

Olivia continued: "I really want to give our baby as much privacy in the first few months, but I know we’re going to be the proudest parents and will want to share the next step of parenthood with everyone. It does terrify me how many scary people are out there though. We’ll just see how we feel in time."

While Alex added: "We just don’t know how we’re going to feel until the baby comes, so for now we’re trying not to think about that and just want to enjoy every moment."

Speaking about some of the judgement they have received, Olivia said: "We both received some negative comments the minute we announced that we were having a baby.

"We've been in the biz long enough to not let it affect us too much though, but people forget that I’m still me even though I’m growing a baby.

"This is only a tiny number compared to the huge amount of positive messages and support we’ve received though, people have been so kind and sweet.

"It’s so common to be judged whether you’re in the public eye or not and it really shouldn’t be like that. Parents need support, not judgement!"

While Alex said: "I’ve received some judgement around DJing whilst Liv is pregnant. But it’s my job and is what I enjoy so I just have to laugh it off and focus on all the positives."

He added: "People also don’t know the conversations we have privately, so we’re just going to carry on doing us and navigate our way as parents as we go."

While Olivia said of the judgement she has received for her career: "I’ll never understand it to be honest, but we just carry on with our lives. We love what we do and wouldn’t want to be doing anything else."

Talking about how they deal with the judgement, OIivia said: "I really see my social media place as my 'home'. I like to think of it as when I invite people in they need to be respectful, and if they’re not, they leave. So I just block the haters haha.

Talking about being part of C&G baby club #LoveDontJudge campaign, Olivia said: "We’re so excited to be a part of this campaign. Having experienced plenty of judgement first-hand since announcing my pregnancy, I’m aware of how much it can affect mums.

"Especially when it’s your first time, you have no idea what you’re doing! I’m so grateful to have this safe space that I can turn to for advice and reassurance that you’re doing the right thing.

"As soon as we joined C&G baby club, we were amazed by just how much information on pretty much every parenting-related topic was there. We really want to shout about this as it has been such a helpful resource for us as soon to be parents… and it's free!"

Olivia and Alex have joined the C&G baby club #LoveDontJudge campaign to end parental judgement before it starts. For more information and to join the club for free, visit CGbabyclub.co.uk.

For all your TV and showbiz updates , sign up to our daily OK! newsletter.