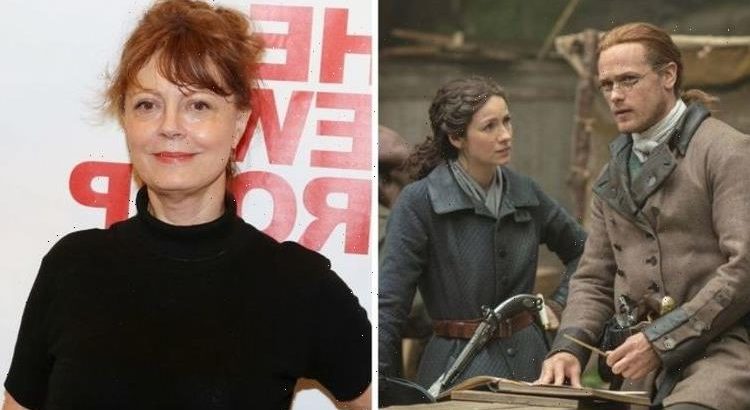 Outlander season five finale ended on a shocking note that left many fans on the edge of their seats. After Starz’s historical series ended in May, star Sam Heughan has finally given viewers an update about the upcoming instalment – after actress Susan Saradon tweeted him about the show’s upcoming season.

The penultimate episode of season five ended on a surprise after it was revealed Brianna MacKenzie’s (played by Sophie Skelton) time travelling attempt had failed.

Alongside husband Roger MacKenzie (Richard Rankin) and baby Jemmy, the family attempted to return to the 20th century but were instead returned to the 18th century.

Despite comfortably living in the past with her family, Brianna had no choice but to return as her young daughter Amanda McKenzie was born with a heart murmur.

As the 18th-century didn’t have the resources her mother Claire Fraser (Caitriona Balfe), a nurse, could use, they decided to travel back to the future.

With the shock of Brianna and her family returning to where they started, many fans were eager to find out what went wrong to result in this.

However, no one was more eager than actress Susan Sarandon.

The Oscar award winner used her Twitter account to desperately reach out to stars Sam and Caitriona for an update – and fans were thrilled with the response.

In response to her question about the show’s return, Sam tweeted: “Name the day! We will make it happen well, soonish.”

Brianna had learned to time-travel from her mother Claire, who had first experienced herself in 1945, while on honeymoon with her first husband.

The World War II nurse was mysteriously transported back to her exact location in Scotland – but in the 18th century.

While in the past, she met Jamie and the two fell in love, leaving Claire to return to 1948 pregnant.

Her husband Frank Randall (Tobias Menzies) didn’t believe her story about time travel and was convinced she came up with it to hide any trauma she experienced while missing.

As for the pregnancy, they agreed to keep the identity for the real father and he raised Brianna as his own.

Sadly, after a huge argument with Claire, Frank lost his life in a fatal car crash.

Claire used this opportunity to tell Brianna the truth about her father and she went back to the past to find Jamie, despite the fact that over 20 had gone past.

Brianna was against travel and decided to stay behind to finish her studies at a Boston university.

However, her decision against travelling to the past was changed in season four, when she became aware of a huge fire.

After Fraser’s bridge went ablaze, Brianna followed in her mother’s footsteps and was transported back to the past to warn them about the fire.

Later on in the series, she ended up staying in the 18th century, met her husband and started a family.

Other than the news of Outlander being renewed for two more seasons, Sam’s tweet to Susan was the only update fans have received about the show.

As the last season finished in May, it’s safe to say that viewers can expect season six in early 2022.

All episodes of Outlander are available to stream on Starz.