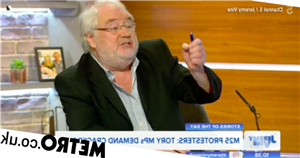 Jeremy Vine viewers are outraged after panellist Mike Parry suggested that ‘minorities have to be squashed’ live on air.

Radio host Parry, 66, was a guest on this morning’s edition of the Channel 5 show, and one segment saw Vine, Parry and fellow panellist Yasmin Alibhai-Brown discussing the Insulate Britain protesters who have blocked part of the M25 with their climate change protest.

Speaking about Tory ministers vowing to ramp up legal action against the protesters, Alibhai-Brown said that we ‘have to put up with’ the protests, saying: ‘I think if we are a free society, and I am very glad to be living in a free society, then we have to put up with some of this. When the farmers took to the roads, none of the traditional right-wing papers objected in the way they’re objecting.’

Parry said: ‘Not to the detriment of millions of others.

‘The problem in this country in all areas is that minorities always get the upper hand because we’re so tolerant, and minorities have to be squashed, like that… so that the rest of society can operate normally.’

Upon saying ‘like that’, he slammed his hand on the desk. 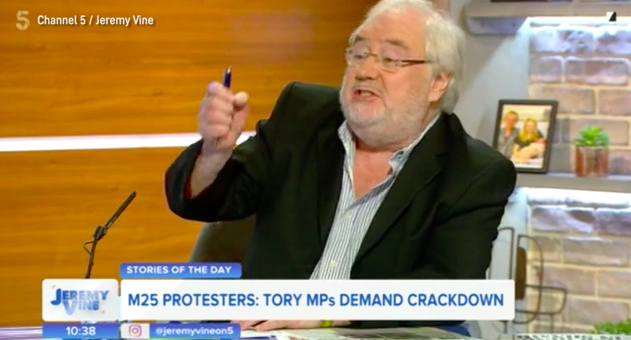 Alibhai-Brown said: ‘I think you should go live in China. They could do with you over there’, with host Vine quipping: ‘Don’t think we want to do too much squashing of minorities on a Friday.’

An out-of-context clip of the segment, starting from Parry saying ‘the problem in this country’, quickly went viral on social media, with people including Stan Collymore retweeting the video.

Hundreds of tweets tagged the broadcasting regulator Ofcom as they argued that the statement was ‘inciting violence’.

Sky Sports commentator Gary Taphouse tweeted: ‘Nuke this show from orbit. It’s the only way to be sure’, while another tweet read: ‘Mike Parry being allowed to say this on National TV is a disgrace.’

Tell MAMA UK, an organisation which measures anti-Muslim attacks, called for the show to be investigated, with a tweet reading: ‘Abhorrent. This must be fully investigated. Simply unacceptable. We condemn this in the strongest terms.’

Earlier in the show, Parry had claimed that ‘nobody starves’ in the United Kingdom, in an argument about universal credit being cut.

Brown offered to take Parry to see a food bank and those affected by them, with the broadcaster replying: ‘It’s very kind of you, but I’ve got other things to do, frankly. Not only that, if there are food banks around, they’re providing a service, I’m delighted they are.’

Parry is a former news editor of the Daily Express and the Press Association, and a former reporter for The Sun, and left talkSPORT in 2019 after 20 years.

He currently presents weekend shows on talkRADIO and is a frequent guest on Jeremy Vine and Good Morning Britain.

What is Ofcom and what does it cover?

Ofcom is the regulator for the communications services that we use and rely on each day.

The watchdog makes sure people get the best from their broadband, home phone and mobile services, as well as keeping an eye on TV and radio.

Ofcom deals with most content on television, radio and video-on-demand services, including the BBC. However, if your complaint is about something you saw or heard in a BBC programme, you may need to complain to the BBC first.

Its rules for television and radio programmes are set out in the Broadcasting Code.

The rules in the Broadcasting Code also apply to the BBC iPlayer.

This Broadcasting Code is the rule book that broadcasters have to follow and it covers a number of areas, including; protecting the under-18s, protecting audiences from harmful and/or offensive material and ensuring that news, in whatever form, is reported with due accuracy and presented with due impartiality.

Audiences can complain to Ofcom if they believe a breach of the Broadcasting Code has been made.

Every time Ofcom receives a complaint from a viewer or listener, they assess it to see if it needs further investigation.

If Ofcom decide to investigate, they will include the case in a list of new investigations, published in the Broadcast and On Demand Bulletin.

An investigation is a formal process which can take some time depending on the complexity of the issues involved.

Ofcom can also launch investigations in the absence of a complaint from a viewer or listener.