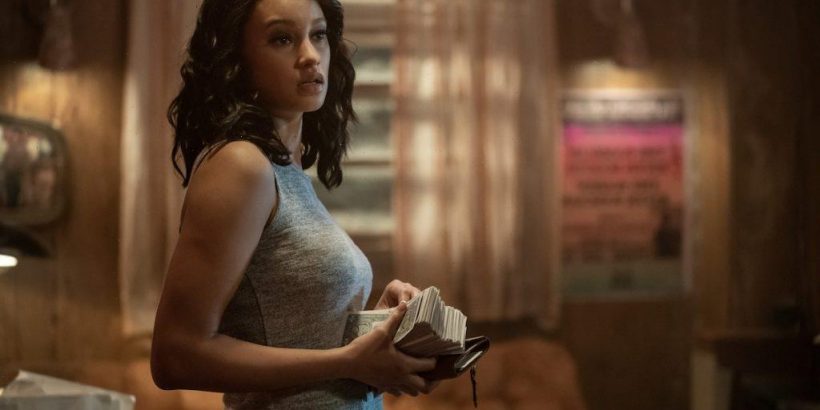 P-Valley is one of the most insightful and well-done dramas on television. The Starz drama series is set in Chucalissa, Mississippi around the mega-popular strip club, The Pynk. Uncle Clifford (Nicco Annan), the non-binary club owner stands at the center of the narrative. Around her are her dancers, Mercedes (Brandee Evans), the club’s headliner, and Autumn (Elarica Johnson) a mysterious newcomer.

Though P-Valley is set in the Southern United States, is Johnson really from Mississippi?

‘P-Valley’ actor Elarica Johnson was born and raised in England

Though her character is from the south and comes to Mississippi on the run, Johnson is actually English. The 32-year-old actor was born and raised in the U.K. In fact, Johnson’s feature film debut was in Harry Potter and the Half-Blood Prince.

“A friend of mine pointed out that there was an open call audition in the newspaper and it was for Harry Potter and the Half-Blood Prince,” she shared on Instagram. “I went and lined up for 10 hours, got in the room, got asked my name, and a hobby. Then the lady was like, “Thank you.” I was really pissed off.”

She added, “I went to leave and someone tapped me on my shoulder. After that I had an audition, then I had a recall, and then I didn’t get the job that I actually went for. But, I had a fantastic phone call with the director who said, “We still want you and we have this part, would you play it?” That was the beginning of my career and that was my first job. It’s going to follow me for the rest of my life and I’m quite ok with it. I played the waitress in the Surbiton station. That was my name, Waitress, and Harry asked me on a date, but we never got to go.”

P-Valley fans knew that the series would be delayed amid the coronavirus (COVID-19) pandemic. However, no one expected that we wouldn’t be returning to The Pynk until 2022. Creator Katori Hall told Indiewire that it would likely take two years for a new season to drop and Starz recently confirmed this news.

Thankfully, the cast has been giving us hints about what we might expect when the show returns. “You’re going to see a lot of things that happen outside the club this season, making it humanizing as well because everyone has a life when they go home from their job and so do these women and these men in the club as well,” Evans told Gold Derby.

It will also be interesting to see how Autumn and Uncle Clifford’s dynamic shifts now that they co-own The Pynk.

Elarica Johnson says P-Valley Season 2 is worth the wait

After traveling back to Atlanta all the way from the U.K. where she had been during the start of the pandemic, Johnson is happy to be back on set. Though Starz has given P-Valley fans a small sliver of what they can expect when the series returns, much of it has been under wraps.

However, the Harry Potter alum has assured everyone that the long delay will be worth it in the end. “If I had a dollar for every time I get cussed out for posting and it’s not about when season 2 is coming… I may have a few #birkin bags in the closet!” Johnson shared on Instagram. “We are working on it guys! You won’t be disappointed! @katorihall put all the spices in this season so I hope you like extra HOT!💋 UNTIL THEN… here is a shameful, wigless BTS on the set of @pvalleystarz S2 💋🖤.”