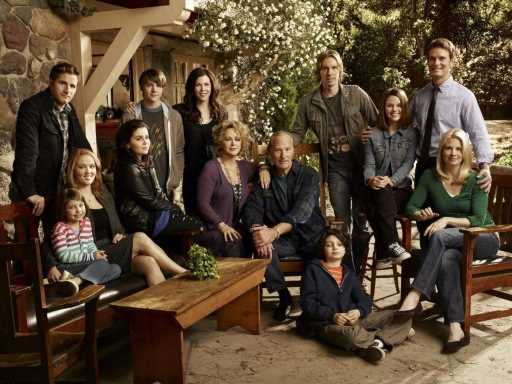 Parenthood wrapped up in 2015 but remains to be a classic by today’s standards. The TV show amassed a substantial following throughout its run and gave fans a glimpse of how large families work. For six seasons, viewers watched the Bravermans go through life and relationships while trying to make good choices and doing right by their family. Parenthood had a unique opening sequence that featured photos of children alongside the cast members. But are the opening credit photos of the show those of the actual cast? Find out.

Parenthood is a show that features three generations of the Bravermans, headed by the family patriarch Ezekiel, the matriarch Camille, their four children, and their families. The Bravermans gave viewers weekly bawling sessions for six seasons. The show followed the children Adam and his wife Kristina and their two children Haddie and Max.

It also featured Sarah, Crosby and his son Jabbar, Julia, and Joel, and their children Sydney and Victor, whom they adopted after failing to conceive their second child. Ezekiel and Camille had been together for fifty years but still struggled to find their footing together. Their children have all taken a distinct path in life but find a way to get back home despite the inevitable bumps along the way.

The show followed a similar format to 1989’s Parenthood film starring Steve Martin. The film might not be spoken about in most conversations nowadays, but it held its own and delivered its impact back then. The movie centered on Gil Buckman, who is finding it hard balancing his family life and career. He realizes Kevin, his eldest son, has mental health problems and requires therapy, and his two other children have their own issues.

After compromising her health, she leaves home, but Nathan, her husband, serenades her and wins her back. The youngest Buckman, Larry gets into get-rich-quick schemes and is Frank’s favorite. After finding out that Larry has racked up a $26000 gambling debt, Frank tries to teach him the family business. Larry, however, moves to Chile, leaving Frank with his son Cool.

The series addressed various things that the film didn’t

Although the Parenthood film was a masterpiece, it left many questions that the series thankfully addressed. Parenthood premiered in 2010 and explored the lives of adult siblings trying to forge their own paths in life. The six seasons of the show gave Parenthood plenty of time to get in-depth about real-life issues, like a Braverman with Asperger’s Syndrome, drugs, and more.

Are the photos in the opening credits those of the cast members?

Parenthood, without a doubt, had incredible and tear-jerking highlights. It also had a genius opening sequence that featured photos of children alongside the cast members. According to Huffington Post, the showrunners asked the cast members to provide family photos to put them in the opening credits.

Miles Heizer, who played Drew in the series, admitted that he wasn’t aware where the picture they used for his credit came from. He, however, reckoned that since the cast submitted a lot of photos, the producers must have picked the one where he was smiling the most.