Paul, 53, played against Diego Maradona on several occasions and was invited to speak on Good Morning Britain after the Argentinian football legend died following a heart attack on Wednesday. The former England professional recalled some of his greatest memories of the late sportsman with hosts Ben Shephard, 45, and Susanna Reid, 49, on the ITV news show. However, those watching at home were pleased to see the midfielder looking so well after years of battling substance abuse, which he has spoken about publicly.

Taking to Twitter, one fan wrote: “@GMB great to see Gazza on the show this morning, he’s looking well and in good form #gazza #GMB.”

Another added: “Gazza on form this morning. Looking great as well! #GMB,” with a third posting: “Best I’ve seen Gazza looking and speaking for a long time #GMB.”

A fourth commented: “Gazza back to his usual funny best on #GMB great to see,” to which a fifth remarked: “Gazza is a living legend #gmb.”

Ben also told the former professional footballer he was looking his best and praised him for how well he appeared. 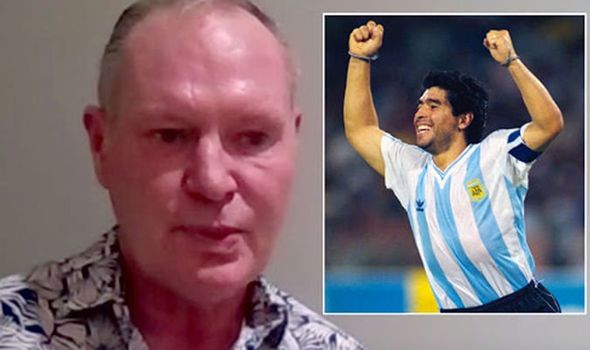 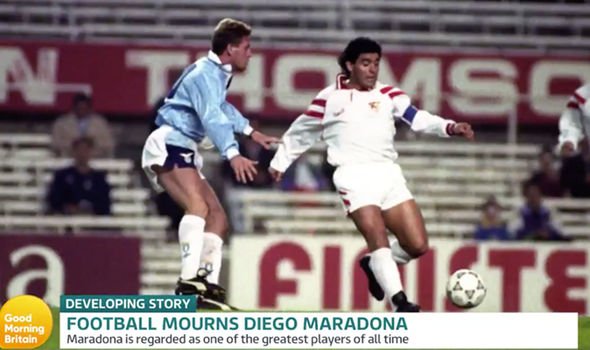 The guest explained as he joked: “Sunbeds are working well, everything is alright. I’m just trying to enjoy life.”

Referencing the pandemic, he told the hosts: “We’ve just got to sit and wait but things are starting to pick up.”

Paul also shared with the presenters one of his memories of the late Maradona, explaining: “I just went up behind him and asked, ‘Can I borrow your lighter, please?’

“And he turned around and started laughing so I shared a bit of a cigar with him and we just clicked then.” 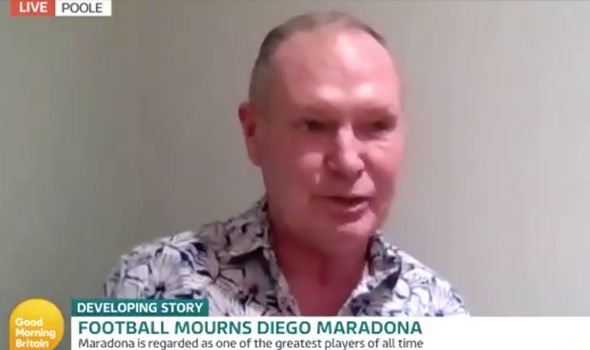 “Maradona was an icon, wasn’t he? A lot of people go on about the hand of God,” Paul said as he praised his former colleague.

The former midfielder then also recalled another memory when he played against Argentina and had a few drinks on the plane.

“In the tunnel, I went to Diego, ‘I’m a bit tipsy,’ and he said, ‘It’s alright Gazza, so am I.’ That was ok,” the professional footballer joked.

“He was magic. I mean, what a player. There are many icons but around the world, Diego was just phenomenal.”

Following the news of Maradona’s death on Wednesday, many stars from the world of football and showbiz have been paying their tributes to the late footballer.

Manchester United alumni Bryan Robson, 63, said: “What a player he was – undoubtedly the best of his era and up there with the likes of Pele among the greatest ever.

“He won the 1986 World Cup for Argentina more or less on his own. The football he played and the goals he scored in that tournament were unbelievable.

“He went past five players to score against England in the quarter-final and then did exactly the same against Belgium in the semi-final.”

“He was a real character too. I played with him in quite a few charity games and he was a great person to be around,” Robson continued.

“It’s a sad day for football but he leaves us with some fantastic memories,” the former professional told Sky Sports.

Good Morning Britain host Piers Morgan, 55, also shared a video of the late sportsman on Twitter as he wrote his own tribute.

In view of his 7.6 million followers, the broadcaster posted: “All you need to watch. The skill… the freedom.. the joy… what a player. #maradona.”