Piers Morgan jokingly stormed out of the ITV studio after clashing with Lorraine Kelly and branding Alex Beresford an ‘idiot’ on Thursday morning over his Good Morning Britain exit.

After going head to head with Donald Trump this morning following the announcement that he was the first guest on his highly anticipated upcoming talk show, the controversial broadcaster came to blows with Lorraine.

The pair locked horns as they discussed Piers’s departure from Good Morning Britain in March, with the journalist insisting that he never walked out.

‘It was your fault though because you walked out!’ Lorraine stressed, referring to Piers leaving his on-screen wife Susanna Reid. ‘If you hadn’t walked out then it wouldn’t have happened.’

‘I didn’t walk out!’ Piers fought back, prompting Lorraine to scream: ‘You did! We saw the video evidence!’

Piers, referring to weeatherman Alex, then explained: ‘I had a little time out because I wasn’t sure how I’d respond if I stayed there listening to that idiot giving me his two pennies worth.’

‘I did walk back in and I did finish that show,’ he continued. ‘I did choose not to apologise and to leave. 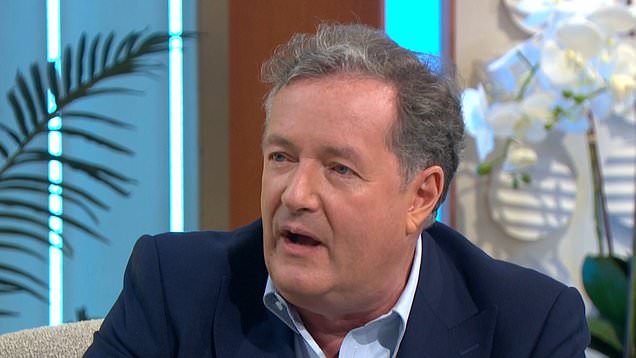 ‘I did love Good Morning Britain, I did love trebling the ratings, I loved all the noise and fun we had and I’m looking forward to having the same success on my show.’

Lorraine attempted to wrap up the interview by telling viewers the details of her guest’s TalkTV show launch date.

She then quipped at Piers: ‘You can toddle off now!’

And, of course, Piers wasted no time in standing up and storming out.

Last year, Piers famously made headlines after leaving Good Morning Britain following an on-air clash with weather presenter Alex over the Duke and Duchess of Sussex’s interview with Oprah Winfrey.

The former tabloid editor said he did not believe Meghan’s claims in the headline-making interview, with his comments sparking more than 50,000 complaints, the most in Ofcom’s history.

The watchdog later ruled that the show was not in breach of the broadcasting code over Morgan’s controversial comments.

Since his departure, no permanent replacement has been announced, with Richard Madeley and others appearing in a rotating cast of guest presenters.

Lorraine airs weekdays from 9am.