Good Morning Britain host Piers Morgan insisted that the Change UK would fail to change anything if they struggled to achieve enough support from Britons in upcoming elections. While speaking to Change UK spokesperson Chuka Umunna, Mr Morgan highlighted that the party currently has a poor image and has fallen to as low as three percent support in early polls. Mr Morgan began his rant by saying: “It can’t help when you have people like Gavin Esler on your side, the former BBC guy who is there calling people who go on television talking about Brexit village idiots.

“It falls back into that terrible mistake that Hilary Clinton made calling Donald Trump supporters a basket of deplorable.

“Change UK seem to have learnt nothing, you are all idiots and we are smarter than you, Gavin Esler has said that.”

Mr Umunna shot back: “I haven’t seen that Gavin Esler clip but what I do know is that we have been collectively as a group have been subject to death threats and violent threats for standing up for what we believe in.“ 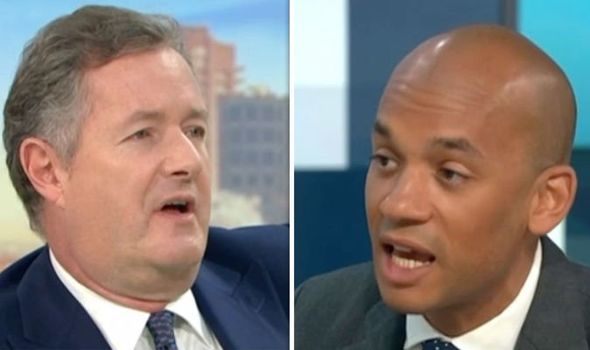 “We have all left our political parties, this is not some careerist move, we have done it because we believe we have got to do the best thing for our country.

“If you look at Anna Soubry for example, Anna has been subject to the most awful treatment.”

The Good Morning Britain host interrupted and said: “So has Nigel Farage by the way.

“I think the toxicity around Brexit is causing people to lose their minds.

“I think the abuse on all sides is disgusting. “

The Change UK MP continued: “I think Gavin is a good example of what people want to see more of in politics.

“Around half of our candidates standing in these MEP elections have no political background at all.

Mr Morgan cut off the Change UK spokesperson to conclude: “But Chuka, the bottom line is you are not going to change anything with three percent polling.

“You are not going to go anywhere.”

The Brexit Party is expected to be the heavy favourite in the upcoming European MEP elections as many voters have been pushing away from the Conservative and Labour Party.