The most resonant films about loss represent a wide variety of genres and modes, and yet they’re all bound together by the shared understanding of a simple truth: Acceptance may be the last stage of grief, but it’s invariably the longest as well. The acceptance of death is neither a respite nor an exit ramp — it’s a purgatory as infinite and layered as the inferno itself, a maze so vast that most people eventually stop looking for a way out and instead start looking for ways to forget that they can’t escape.

That bitter truth unites everything from “Personal Shopper” to “The Babadook” to Krzysztof Kieślowski’s “Blue.” Bolstered by a poignant Nicolas Cage performance, Michael Sarnoski’s “Pig” joins the crowd with a movie about a man so lost in the labyrinth that he thinks he’s living outside of it. The movie may not squeal Oscar bait, but in a perfect world, it would be a frontline contender.

Robin Feld (Cage) is a revered Portland chef until personal tragedy inspired him to trade clout for snout and spend the rest of his days as a reclusive truffle forager in the woods at the edge of the city. He seems to have attained a degree of enlightenment in the wake of his wife’s death some decades earlier. People who decide to “Walden” themselves away from modern society always appear as though they understand something that the rest of us don’t, and Robin has essentially molded himself into the bearded apotheosis of that age-old trope.

He and his beloved pig sniff out valuable fungi by day, sleep together inside the same rustic cabin at night (“I don’t fuck my pig,” Robin will later clarify), and never stray beyond the mystical thicket of fog that shrouds their edenic forest home from the vulgarity of civilization. There’s no money. There’s no Twitter. There’s no human contact whatsoever beyond an audio tape of his wife that Robin can’t bear to listen to, and his wordless transactions with the flashy young produce supplier (Alex Wolff as Amir) who swings by in his sick yellow Camaro on Thursday mornings in order to exchange truffles for supplies.

It seems like Robin has it all figured out; so many of us are shown the impermanence of our world, but here’s someone who actually stared it down, removed himself from a society of empty pursuits, and sought meaning by an honest measure. Then some meth addicts steal Robin’s pig, the man goes haywire, and it shifts into focus that he hasn’t accepted his wife’s death at all. On the contrary, we realize that Robin found life without her so hard to stomach that he just left it behind and refused to look back. It’s not denial so much as a slightly more extreme version of the way that most people learn to cope long-term. And yet that’s exactly why this myth-like tale makes for such an essential addition to the rich history of movies about grief: “Pig” doesn’t see acceptance as the end of one road, but rather the beginning of another — a road so long and winding that even its detours might lead you straight through hell and out the other side.

The fact of the matter is that anyone could make an unhinged Nicolas Cage movie about a misanthropic weirdo who reacts to the most profound loss in his life by moving deep into the woods and forming a spiritual bond with a truffle pig. At this point in Cage’s professional career — a wild body of work split into so many different stages that not even Elisabeth Kübler-Ross could make sense of it — it wouldn’t be surprising if he’d already played an avenging, pig-obsessed chef in three different movies before this.

The power of “Pig,” however, is buried in how Sarnoski and story co-writer Vanessa Block refuse to consider Robin as some kind of deranged eccentric just because he removed himself from society after losing a loved one; few of the people Robin confronts during his adventures through Portland’s culinary underworld dare to mention the wide streaks of dried blood that have been painted on his face since his brush with the meth addicts. No, “Pig” is more curious about why the rest of us haven’t followed Robin’s lead.

The character is certainly among the most relatable that Cage has ever played, as his expressionistic performance — a sharp pivot away from the “western Kabuki” style that he’d grown tired of “exploring” — personifies that fun part of the grieving process when you feel like the only person who’s ever gone through it, if only because it seems impossible that society would continue to function if everyone else had to process the same pain. “We don’t get a lot of things to really care about,” Robin tells someone, but most of us are able to busy our minds with distractions. Fame. Religion. A yellow Camaro. Alas, Robin saw right through the narcotizing vapor-trail that death leaves behind.

So he cut himself off from all people because he was so wounded by losing one person. He ran away, met a pig, and found another thing to really care about so that he wouldn’t have to really care about anything else; it would sound more bizarre if the impulse weren’t so recognizable; it would likewise sound more enlightened if it weren’t so basic. Equal parts Remy the Rat and Tyler Durden, Robin wants you to believe that his coping mechanism is fundamentally better than the materialism Amir uses to deal with his “dead” mom. But while it’s true that Robin has earned a certain wisdom during his time in the wilderness, it’s also true that his clarity in one area reveals his myopia in another.

“Pig” is a loose riff on the Orpheus myth, which is clear enough from the moment that Robin forces Amir to drive him into downtown Portland, a descent-into-hell sequence that ends with Robin wending his way into an underground fight club deep inside the bowels of a classy restaurant. That the aforementioned line cook is now the head chef at a gastronomy restaurant called Eurydice is merely icing on the cake (or smoke on the scallops, as it were). But the analogue only goes so far. Orpheus’ wife died because he turned around to see her before she could follow him out of Hades; Robin’s wife died before he even thought to leave, he just still can’t bring himself to look at her memory over his shoulder.

That pig was the only thing that allowed Robin to keep his eyes pointed at the road ahead, and when it’s taken from him, he’s left with no other choice but to stare back into the abyss — revisiting the places he’s tried to forget since becoming a widower, and confronting the people whom he once left there. Sitting across a diner table from Amir at the end of the film and trying to make sense of how he ended up there, Robin spells it out in the clearest language he can: “I was thinking that if I never came looking for her, in my head, she would still be alive.” He’s talking about the pig, but he isn’t only talking about the pig. 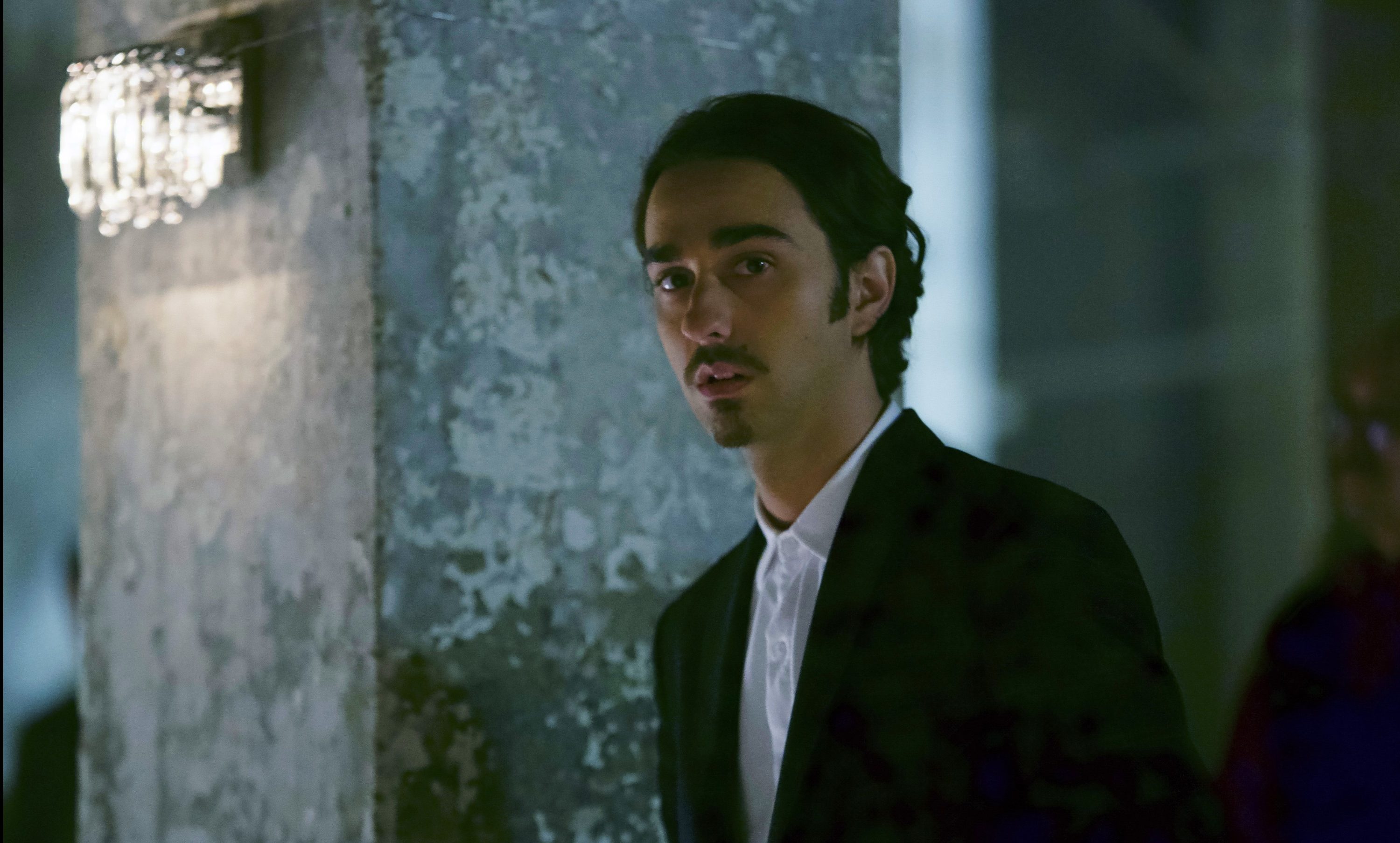 There were some aspects of grief that Robin was able to accept with enviably little trouble: Success is bullshit, street cred is a parlor trick, and one day an earthquake will probably swallow Portland into the Earth. He knows that a meal is only worth as much as the memories it leaves behind or summons back to the surface, he knows that truly caring about what we do and who we love is the only sacred experience that life can offer, and he knows that you should use stale bread to make french toast. Most of all, he knows that every day that isn’t spent in service to such things is an act of self-erasure. “You live your life for them,” Robin says to his former pupil about the snooty people he’s trying to impress, “and they don’t even see you.”

On the other hand, no one has seen Robin in more than a decade. Most assume that he’s dead, while the rest speak to him as though he might as well be. “I remember a time when your name had value,” an old associate chuffs. “But now you don’t exist anymore.”

The guy’s wrong, but not entirely. Robin’s decision to abandon the dog-eat-dog trappings of the big city in favor of pigging out in the woods doesn’t mean that his name has lost any of its value, only that the metrics have changed. And yet, for all the monastic charm of Robin’s current situation, there’s an element of self-erasure to that lifestyle as well. When he ignores Amir at the start of the movie, we assume that it’s because he’s a weirdo misanthrope who’s transcended the need for small talk; when he finally opens up to the kid some 90 minutes later, we realize that Robin was probably scared more than anything else. Scared of being seen. Scared of admitting that he was still alive.

While the righteousness of Robin’s quest might seem to put him in a more noble category than the poseurs and criminals he encounters along the way, he ultimately isn’t so different from Amir, or from Amir’s cold-hearted kingpin of a father, Darius (Adam Arkin), who’s so hurt by the loss of his own wife that he cosplays as a gangster in order to find the strength to survive. It’s the similarities between these three characters that come to a boil during Pig’s sublime dramatic climax. Robin and Amir break into Darius’ home and — in another flourish that recalls the fetch-quest plot mechanics of Greek myths, as well as their preoccupation with the magical powers of food — use the various ingredients they’ve collected along their journey in order to make Darius a meal to remember (in the most literal sense). In turn, Robin gets a much-needed taste of his own cooking, along with a bitter reminder of the fact that acceptance is never finished.

Robin is a holy truth-teller of sorts, and his benevolent rampage across Portland (from its basements to its hilltop mansions) finds him reminding one person after the next what really matters to them; the truth has been on the tips of their tongues for all this time, and Robin simply forces them to taste it. He teaches the little boy who lives in his old house that persimmons will ripen into tannins if you let them, and shows Darius how the right wine pairing can be more potent than any of the power he wields over the city.

In return, these strangers provide Robin the opportunity to savor the things he once cherished about life. Not just the smell of fresh truffles, but the sweet alchemy of cooking them for someone else; the sorcery of transforming a meal into a time machine in a way that reminds both patron and chef alike that love is our only lasting protection against loss. But acceptance, Robin discovers through the second greatest loss of his life, is something we seldom find on our own, and even more seldom get to keep. More often, it’s something that we feed to each other. It can be hard for someone who lives alone in the woods to appreciate that, just as it can be hard for someone who lives in the city to imagine that most of the strangers they see on the street every day are walking around with a similar hole in their hearts.

One of the most honest and poignant movies about mourning, “Pig” maintains the courage to admit that grief never really goes away because it finds the clarity to recognize that people are never really gone.