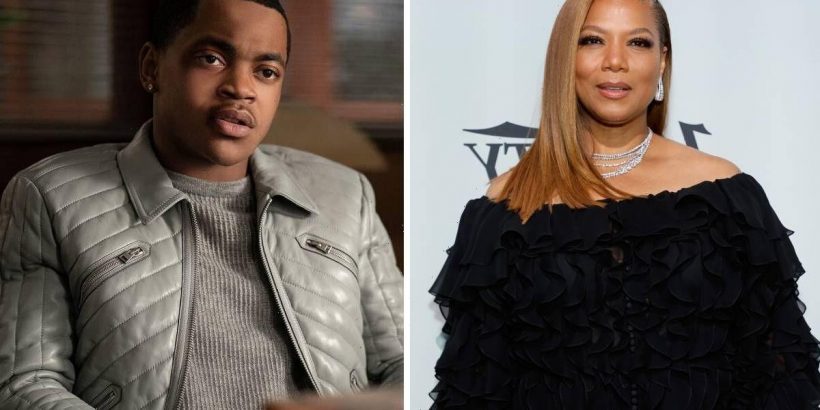 Power Book II: Ghost season two finished airing in February 2022 but there is no need to worry about its future as it has already been given the go-ahead for a third series. The Starz crime drama follows the likes of Tariq St Patrick (played by Michael Rainey Jr) as he navigates life at college alongside his drug-dealing side hustle. Actor Rainey Jr has been speaking with some of his fellow castmates on who he would like to see appear in Power Book II.

Could Queen Latifah join the cast of Ghost?

Actor Rainey Jr hosts the podcast The Crew Has It with his Power co-star Gianni Paolo who portrays his on-screen best friend Brayden Weston.

They were joined by actress Effie Morales who plays Alix Lapri in the spin-off, questioning her on who she would like to see join the drama.

But it was Lapri’s choice of actor that developed the conversation further.

In response to Rainey Jr’s choice, she said: “OK so I feel like I want to pick a woman then. Maybe like… Queen Latifah.

“I could really see her playing like, I don’t know… maybe a family member of the Tejadas.

“She plays that kind of stuff so well. Like that cold, heartless, ruthless woman.”

Rainey Jr soon jumped on the bandwagon, excited at the thought of the actress, rapper and singer joining the show.

“She would be a fire gangster. Like, we run into her doing business and she comes and f**** our s*** up. That would be fire too.”

Sadly, it does seem unlikely Latifah will join the Starz drama any time soon due to her increasingly busy schedule.

Since 2021, she has been starring in and working as an executive producer on the CBS series The Equalizer.

Going by her IMDb page, Latifah has various other upcoming projects in the pipeline.

She will be starring in the mystery movie End of the Road, drama Paper Chase and biopic Mahalia! which is based on the life of gospel singer Mahalia Jackson.

All of which Latifah is also an executive producer for so it is safe to say she has currently got her hands full.

This isn’t to say that she couldn’t do in the future, seeing how other popular stars have made their way into the cast.

There is also Method Man as lawyer Davis MacLean and rapper and record producer Redman who portrays his brother.

So perhaps Queen Latifah will also join the ranks of the star-studded Power cast.

Power Book II: Ghost is available to watch on Starz in America and Starzplay via Amazon Prime Video in the UK.