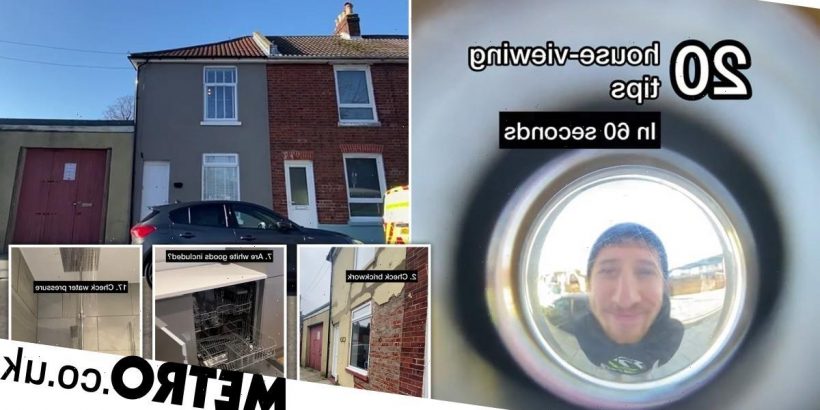 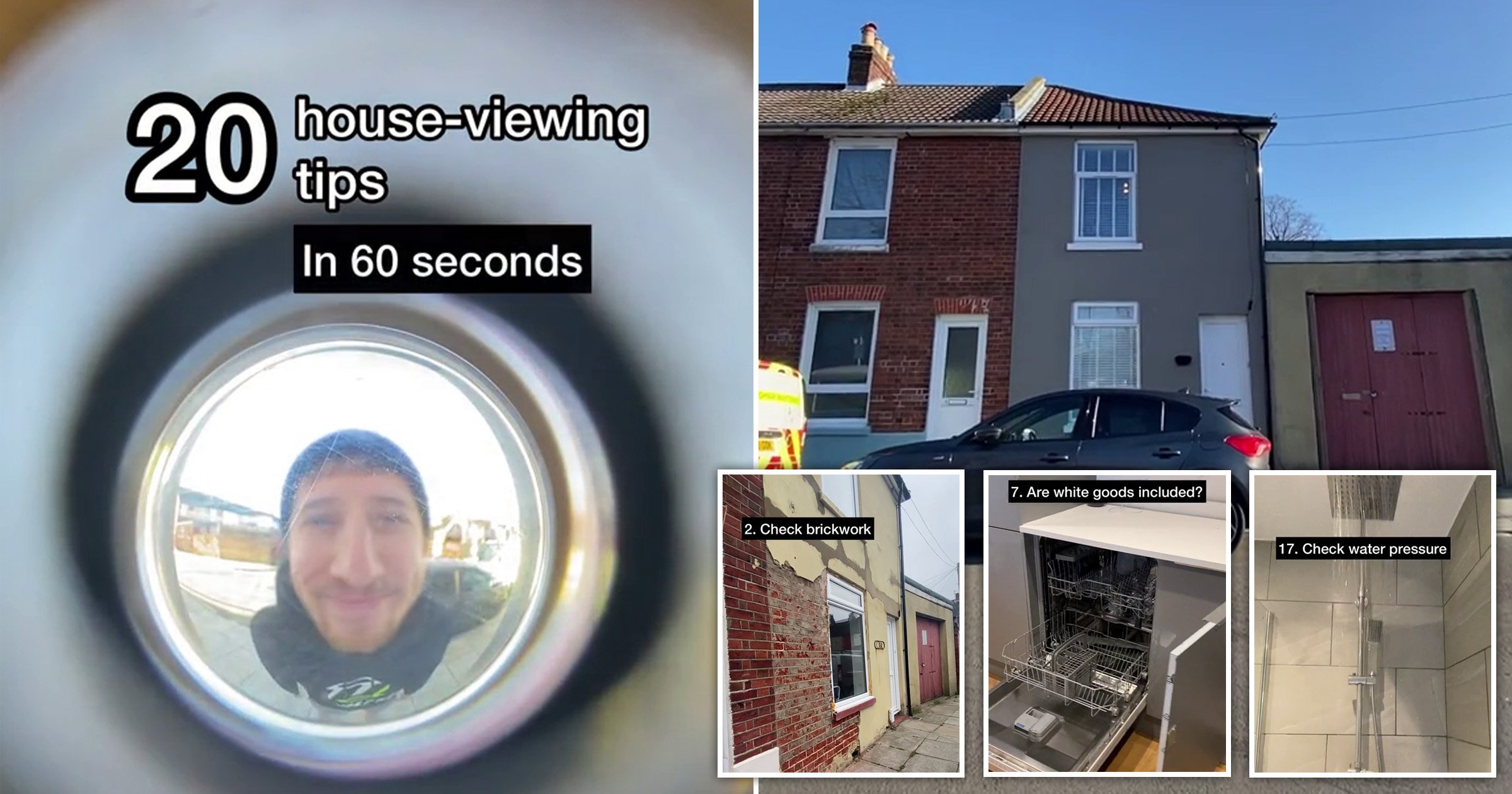 Buying a property can be fraught with questions and queries.

It can be easy to get sucked in to the excitement of moving, and the pressure of a sale progressing quickly – but it’s important to make sure you’re checking all the right things before you tie yourself in to a big commitment.

But for first-time buyers, it can be tough to know what things you should be checking.

Thankfully, help is on hand. That Property Guy on TikTok, otherwise known as Kyle Mattison, has shared a comprehensive guide on all the things you should be looking at before you commit to buying a place.

The 29-year-old says anyone viewing a house in 2022 should take a close look at several areas – both inside and outside – before making an offer.

He says it’s important to make a list of anything in the house that isn’t working – or anything that looks like it could be an issue in the future – in order to save yourself money on costly repair jobs.

From the light switches, to the brickwork, to the guttering and cracks in the walls, there are some warning signs you need to look out for when you’re viewing a prospective property.

Most of these issues won’t be serious, and it shouldn’t necessarily put you off making an offer – but it might be something you can take into account when you’re thinking about how much money to offer.

Don’t forget that as well as making these checks for yourself, you’ll also need to get a survey done, which can pick up on any potential issues that are harder for you to spot.

Kyle, who has nearly half a million followers on TikTok, has bought and sold several houses, and has renovated some of them as well, so he has plenty of first-hand knowledge.

Here is his list of the 20 things you should check when buying a house:

Kyle says you should look up before you enter the property to see if there’s any damage to the roof, including broken tiles.

A couple of damaged tiles might not feel like a big issue, but they could lead to leaks in wet weather – which cost more to repair later.

The same goes for brickwork too. Kyle says you should check for broken bricks or render.

Don’t feel weird about standing outside the property before a viewing – these quick checks could help you identify serious property red flags.

While you’re outside, it’s also worth taking a look at the guttering if you can see it.

Kyle advises checking for broken or damaged guttering, or any blockages – as this can also cause damp problems, which can end up being really costly.

Are you being overlooked by anyone? No matter how close you might become with your neighbours, you probably won’t want to see them staring into your bedroom first thing in the morning.

We all know damp in the home is a bad thing – but how do we spot the signs?

Kyle says you need to look for wet walls, condensation and mould. It’s not only unpleasant to look at, it’s also really bad for your health, and can cost a bomb to get rid of.

‘Look out for cracks as they could be a sign of subsidence,’ says Kyle.

If you’re seeing cracks on the walls, they may just be a surface issue, but in the worst case if it’s subsidence you could end up with serious structural issue that need fixing. Which is, again, pricey.

Kyle recommends asking if white goods are built in, or if they are included in the sale of the property.

Shelling out for a new fridge, washing machine and dishwasher could set you back quite a lot – so knowing if any of those items come with the house could be a big plus.

It’s up to the seller whether they want to include those items in the sale, so it’s worth asking that question.

“‘Do they work?’ asks Kyle in the 60 second clip. Don’t forget to check the locks on the windows as well.

A broken lock won’t cost the world, but if every lock is dodgy, that cost will quickly add up.

As well as locks you want double glazing – but make sure they haven’t blown.

This means that the seal has broken and you can often see condensation between the two pains of glass – it’s obvious becuase you won’t get a clear view out of the window, and if the seal is broken, that means the windows won’t be as effective in keeping in the heat and sound insulation.

Have a little jump up on down when you’re in the property.

This is to test that the floors feel stable. Kyle says you’re looking for any signs of movement that might indicate a more serious underlying problem.

Kyle says you should test a few lights to make sure they work.

It may be just that you need a new bulb, but faulty lights might also indicate a larger problem which requires rewiring work – which doesn’t come cheap.

The same goes for sockets. But, as well as checking that they work, Kyle adds: ‘are there enough of them?’

It can be annoying having them in the wrong place and extension cables come in useful – but adding new sockets and moving them can cost money and is quite a big job.

‘Make sure you know where they are and that they are in good condition,’ says Kyle in his TikTok video.

Not only do you need to know where they are in order to get your meter readings, it’s also good to check that they’re not in an awkward or unsightly place, or too difficult to access.

You’ll want to check everything is in order here too and that it works in the first instance.

A new boiler can cost up to several thousands of pounds – and could add a huge extra cost to moving into your new home. So it’s good to know where you stand.

There are many different types of heating you’ll find in homes, from gas central heating to greener heat pumps.

There are different costs involved in terms of upkeep and running costs, so check these out first to avoid surprises later on.

‘Especially useful in the winter months, are there enough radiators’ Kyle suggests.

Radiators need to be powerful enough to heat the size of the room, so if you have a huge room with just one small radiator – that might not do the trick. Adding new radiators or moving existing ones can cost you hundreds.

Particularly important if you have a lot of hair to wash.

‘No one likes a drizzly shower,’ says Kyle and plumbers don’t come cheap.

This can also be related to the boiler and heating system it’s worth checking all three.

If you’re keeping count – Kyle counts these as three checks. Ask to see the reports that show gas safety, electrical safety as well as the EPC.

Homes must have an Energy Performance Certificates which rates the energy efficiency of the property, so the seller should be able to provide this for you. It should give you piece of mind that everything is in good working order.