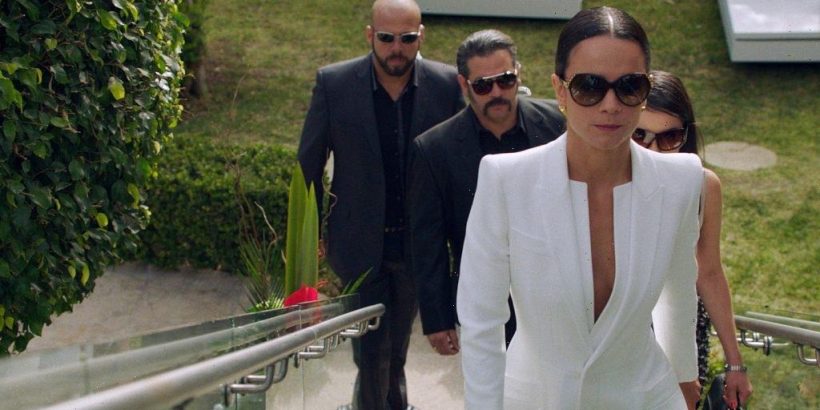 Though the penultimate episode of Queen of the South is not the series finale, it sure felt like one. Season 5 of the TV show has taken fans on a rollercoaster ride along with Teresa, Pote, Kelly Anne, Chicho, and the rest of the gang. With countless enemies and fragile business deals in place, everyone’s been at risk. But not even James the Wise was prepared for what happened in “A Prueba de Balas.” Or was he? Fans weren’t prepared either, and there are questions about Teresa, Devon Finch, and the entire plot.

[Spoiler Alert: This article contains spoilers for Queen of the South Season 5 Episode 9]

Kostya is dead, but Devon Finch is not finished

After weeks of anticipation, everyone — including viewers — finally had the chance to meet Kostya up close and personal. All the while, Boaz hatched his own plan in New York to disrupt Teresa’s operation and partner with the Russians.

Fortunately, she beat Kostya at his own game and poisoned him during their face-to-face meeting. It was badass. It was gangster. It proved why she’s the queen who always thinks steps ahead.

But something is off because Boaz is still out there, and it’s unclear whether Devon intends to get rid of him. What he did want to do however, was have James kill Teresa. Devon orders James to make the hit.

The scene cut to the famous season 1 opener where Teresa, Pote, and her clique arrived on a chopper (in Belize, apparently) and she settles into her mansion. It all looks so familiar.

While in the bathroom, Teresa’s hit by a sniper’s bullet, and it’s James holding the rifle from across the way. Teresa hit the floor with blood draining from her mouth. But this time, there’s no narration. Teresa doesn’t say, “I always knew this day would come.”

This part confused, divided, and angered viewers who weren’t expecting the episode to end in this way. Is she dead? Is Jeresa a farfetched fantasy? What the __   just happened? People are picking their jaws up off the floor.

Some fans believe Teresa is alive

A preview for the series finale is concerning. Teresa’s in a body bag at the morgue, and Pote says something about carrying out her wishes after death. After seeing her drop, what is left? There are many fans who believe James helped Teresa fake her death to get Devon off her trail. She’s been planning an exit for some time, but did she prepare for this eventuality with Devon too? Perhaps.

James and Teresita proclaimed their love, and after everything she’s been through, it’s plausible he wouldn’t go through with killing her. There are chemicals that can help someone mimic death. And James is a trained professional for the CIA.

With Teresa “dead,” Boaz can let his guard down and Devon is on ice. That gives Pote, Chicho, and James an opening to take care of them both. Several fan theories on Twitter and Reddit posit that Teresa concocted a ruse to throw Devon off her back and to get revenge on Boaz.

The only clue to episode 10 is this description on IMDb: “Pote, Kelly Anne, and James try to disappear, but they must fend off attacks from Devon Finch and Boaz.”

Tune in for the Queen of the South series finale on June 9 at 10 p.m. EST.