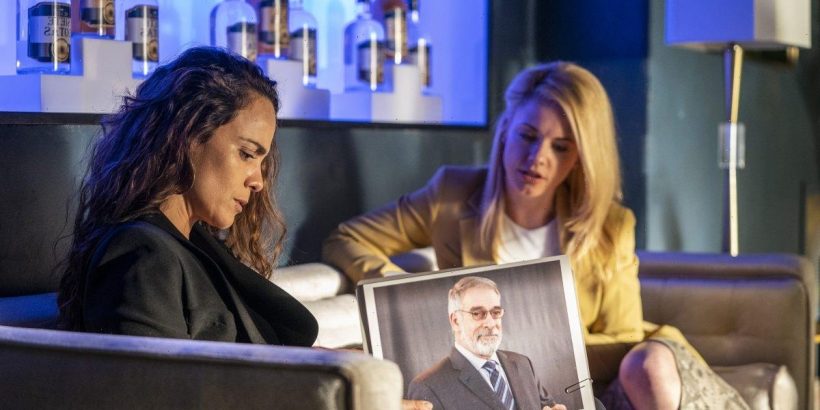 Queen of the South viewers got a big surprise at the beginning of April 21’s new episode. The USA TV show is only three episodes into season 5 and Teresa Mendoza (Alice Braga)’s world is already spiraling out of control.

[Spoiler alert: This article contains spoilers for the Queen of the South episode “No Te Pierdas La Cabeza.”]

Benjamin Lobato is co-showrunner of Queen of the South along with Dailyn Rodriguez. Lobato has been a writer for Queen since the beginning and spoke to Showbiz Cheat Sheet by phone about the final season. We’ll have more with Lobato throughout the season as new episodes air Wednesdays at 10 p.m. on USA.

Here comes the judge, and there goes the judge. Judge Lafayette (David Andrews) was a thorn in Teresa’s side throughout season 4. Then Boaz (Joseph T. Campos) took matters into his own hands and decapitated the judge. Teresa’s going to have to alter her plans.

“Coming out of season 4, she had to, in a way, commit the ultimate crime against her own soul, which is hand over one of her family members to the judge for judgment,” Lobato said. “That was Javier. So we have to follow that up. Episode 2, we’re already well into that with the judge where she’s trying to right the ship. Then of course we have the wild card Boaz who now is going to blow things up a bit.”

Was Boaz right about Judge Lafayette?

Teresa always prefers diplomacy to violence. However, her methods couldn’t protect her family in season 4. Maybe Boaz was right to nip the judge in the bud.

“One of the things that we were working with this season, the idea is that Teresa Mendoza has always operated with this moral code,” Lobato said. “As you saw, he scene with Boaz in the bar where he comes in and he says, ‘Listen, had you killed the judge the moment he put his hand in your pocket, none of this would have happened. Javier, Emilia, even your godson Tony would still be alive.’”

What’s next for Teresa Mendoza on ‘Queen of the South’ Season 5?

Lobato teased how Teresa will adjust after the death of Judge Lafayette.

We thought that’s a really poignant moment because the reality is that this season where Teresa really takes hold of her power in a way that she never has. There’s something that she learns from Boaz. Boaz knows how to survive and thrive in this world. She has been moving forward with the thesis that my moral code is the thing that’s going to lead me to success and safety. What she came to find out last season is that that’s not the case. She can make as many alliances and deals as she wants, but somebody’s always going to betray you, there will always be issues. And so this is the season where she really unapologetically becomes the queenpin, that really emboldened and empowered character that we’ve had glimpses of in the white suit.”