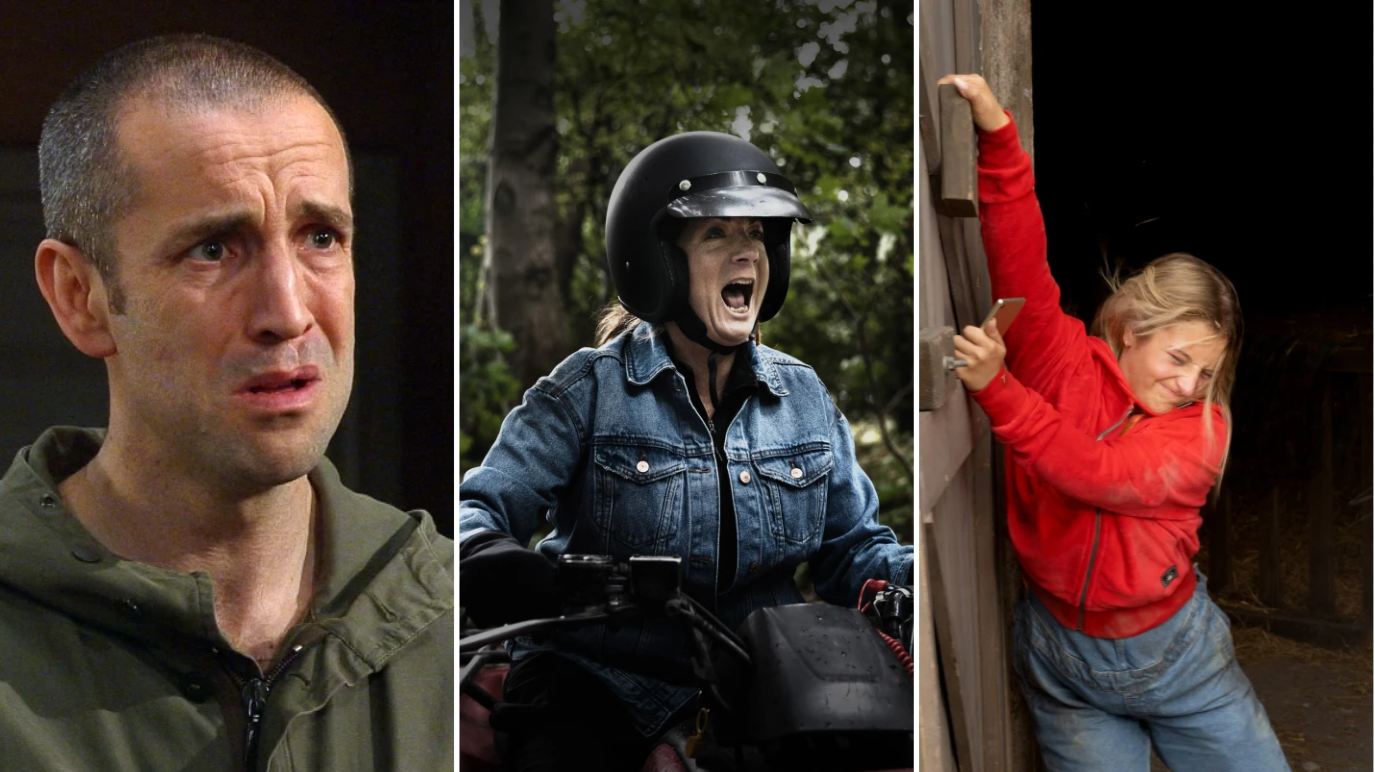 We’re just two days into Emmerdale’s special week of anniversary episodes and already, so much has happened.

Sunday night – exactly 50 years since Emmerdale began – saw the residents lives put in danger when a huge storm arrived over the village.

It was last night’s instalment of the ITV soap that really saw some major storyline developments and now, we have a lot of questions.

As we delve a little deeper into the scenes we’ve seen (clever) so far, join us for speculation and spoilers as we try and work out how the rest of the week will pan out.

During Sam’s attempt at saving himself, he fell and became impaled on a tractor blade.

The blade itself is completely through Sam’s body – if he survives it will be a miracle.

Or are we about to say goodbye to him?

Will Kim get accused of murdering Harriet?

Given everything that happened in the lead up to the anniversary week, Kim and Harriet were mortal enemies come Sunday – it is perfectly possible for Will (Dean Andrews), Dawn (Olivia Bromley) or maybe even Billy (Jay Kontzle) to wonder if Kim deliberately left Harriet to die.

But will any of them act on their suspicions?

Are we about to see Kim face time behind bars?

Will Amelia and her baby survive?

Fortunately, Amelia (Daisy Campbell) has been found by Lydia (Karen Blick) but unfortunately, they are both still currently in the barn with no phone signal – and Amelia is in labour.

Will both mother and baby survive what is going to be a traumatic birth?

Will Chas an Al’s affair be exposed?

Pass us a pen and paper because we need to add Kerry (Laura Norton) to our list of people potentially about to expose Chas (Lucy Pargeter) and Al’s (Michael Wildman) affair.

Last night, as the wind picked up, Al chose to save an injured Chas instead of Kerry – who had just been knocked over by a falling bush.

Kerry was left to pick herself up and dust herself down, observing the entire exchange between Chas and Al and wonder why on earth her fiancé didn’t come to her rescue.

If Kerry isn’t able to work out what’s going on, it could well be Aaron (Danny Miller) who reveals the affair…will that be the final thing he does before he leaves again?

Who will find the wedding party?

Charles (Kevin Mathurin), Nicola (Nicola Wheeler) discovered an abandoned minibus last night, allowing them to conclude Kim and Will’s wedding party must’ve got off and attempted to seek shelter after the tire burst.

Driving the minibus was Nicola’s partner, Jimmy (Nick Miles) and right now, we don’t know where anyone from the vehicle has gone.

As the week continues, we’ll no doubt discover Jimmy and the passengers’ fate – but will any of them be next to die?

Which leads us nicely onto the next question…

Who will die next?

With many lives in peril, Sam is probably the character most likely to have his future taken away from him given the fact that, you know…he’s halfway through an incredibly sharp tractor blade.

However, we also know Isobel Steele is reportedly leaving her role as Liv Flaherty and while it hasn’t been confirmed, rumours are circulating that Vinny’s (Bradley Johnson) partner will end up dying this week.

It’s a lot to get your head around, isn’t it?

Major spoilers surrounding the anniversary week are being kept top secret – of course! But this tweet posted on the Emmerdale account allows us to safely say the aftermath of Sam’s accident will unfold tonight.

Last night left Sam not in a good way! Will he be okay? Or will he be the storms next victim? ð±

But will he live?

And who else will end up in danger?