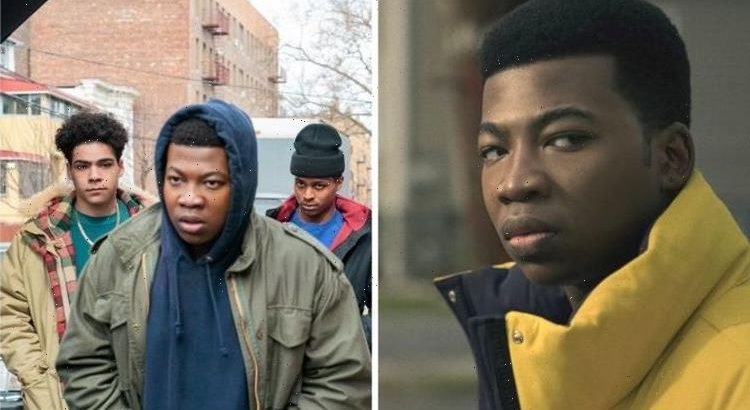 Raising Kanan was the highly requested spin-off from the original series of Power and since the beginning, the posthumous character Breeze had frequently been mentioned. However, after episode five Starz streamers noticed a major contradiction about the villain’s story.

This series gives fans an insight into the upbringing of Kanan Stark (played by Mekai Curtis), a character portrayed by 50 Cent in the original series.

As he was a complex character, many fans requested showrunners create a spin-off which delved into his childhood.

The original series followed James ‘Ghost’ St Patrick (Omari Hardwick) as a patriarchal businessman by day and night he was one of the biggest drug dealers in New York.

Alongside his best friend Tommy Egan (Joseph Sikora) the self-proclaimed brothers would kill, steal and destroy whoever stood in their way.

Kanan made his first appearance as a felon behind bars, who had been sentenced for a dangerous drug charge.

Throughout the series, it was revealed Kanan taught Ghost and Tommy everything they knew about the streets as a mentor, although Ghost had been secretly plotting behind his back.

Although he never made an appearance on the series, it was mentioned Breeze showed Kanan the street life as a teenager.

However, after watching the Raising Kanan fans noticed a major contradiction about Breeze’s position in Kanan’s life and took to Reddit to expose this.

In response to a post discussing the latest episode, one viewer wrote: “They was like Breeze taught him the streets when his mom is a f**king queen pin too so I don’t know what he gains from him in that way honestly.”

As well as the spin-off series displaying how the teenager started as a criminal it also introduced his mother Raquel ‘Raq Thomas (Patina Miller).

She was portrayed as the no-nonsense, yet glamorous boss who distributed drugs across New York.

With a mother who was large and in charge, it would seem as though there was nothing else Kanan could’ve learnt about the streets from Breeze.

The pilot episode of Raising Kanan, showed him getting his very important first lesson in the art of shooting from his mother.

This came after the teenager had a price on his head after fatally shooting a member of a rival gang despite Raq forming an allegiance with them.

Another fan agreed with the post and responded: “This show doesn’t match up with Power Kanan at all. 50 must’ve wanted his character to suddenly be like Riq so here we are. Just gotta ignore everything you heard on Power about his past.”

The series has yet to introduce Breeze into the show, so fans will have to stay tuned to see what impact he makes on Kanan’s upbringing.

He had died long before Power had begun at the hands of Ghost, who shot him behind his back as he was watching tv.

In the season six episode titled No One Can Stop Me, Ghost told his son Tariq St Patrick (Michael Rainey Jr) he killed Breeze because he felt like he was standing in his way.

He revealed: “I was your age when I killed him. I killed Breeze because he got in the way of my future.”

Fans can expect to see Breeze make an appearance soon, as his death is said to have been between 1996 and 1997, and Raising Kanan is set in 1991.