The drama between the ladies of Potomac doesn’t stop. Not even in the offseason.

First, there was a physical altercation between Candiace Dillard and Monique Samuels on October 16. Then, Monique was charged with second-degree assault from the altercation.

Now, Candiace has also been charged with assault, based on a countersuit filed by Monique.

All About the Tea is reporting that Monique has also pressed charges against Candiace for an assault from the October 16 incident. Monique filed her countersuit on November 14.

Both ladies are scheduled to appear in court on December 23.

The Tea of Potomac has shown a social media post where Monique was clarifying to a fan that she filed the countersuit.

The fan said, “How u press charges when you’re supposed to be about that life though?? I like them both I really do…I love me some @mrsmoniquesamuels and I doubt she’d stoop that low but Candiace needs to just keep it moving…everything in life doesn’t need a reaction or a response.”

Monique replied, “It’s called a counter. That’s how it works.”

In an Instagram post, Candiace stated that she was supposed to perform the national anthem at a basketball game, but is now unable to because of her “removal from the program by @sweetcookie100 by way of #moniquesamuels.”

🛑PLEASE READ 🛑 When your lackey’s have nothing better to do than to crawl around on their hands and knees behind closed doors; attempting to throw dirt on my name, fighting a losing war alongside their harrowing employer… For my beautiful followers who were prepared to celebrate with me at the @washingtonfusion game as I performed the #NationalAnthem, I regret that I must inform you all: I will not be able to perform on Saturday. This turn of events and my removal from the program by @sweetcookie100 by way of #moniquesamuels is for the fulfillment of a personal vendetta over ones own indiscretions. I look forward your next hat trick, saints. For my friends and followers: stay tuned for my next ❤️AMAZING❤️project featuring some incredible talents for the collaboration of a lifetime. I can’t wait to share it with you!!! #ISeeYou • • • #RHOP #BravoTV #shecamefromJesus #sleepingbeautyiswoke #candiacedillard #candiacedillardbassett #primahaircollection

“Over here minding my business and here she go with my name in her mouth.”

Monique then continued. “Seriously? Boo boo you are not, never was and will be that important to me. people with no REAL responsibilities crack me up!!! As if I have time to care about your failed attempts at being booked. You’re laughable. Keep showing the world how obsessed you are #rhop.” 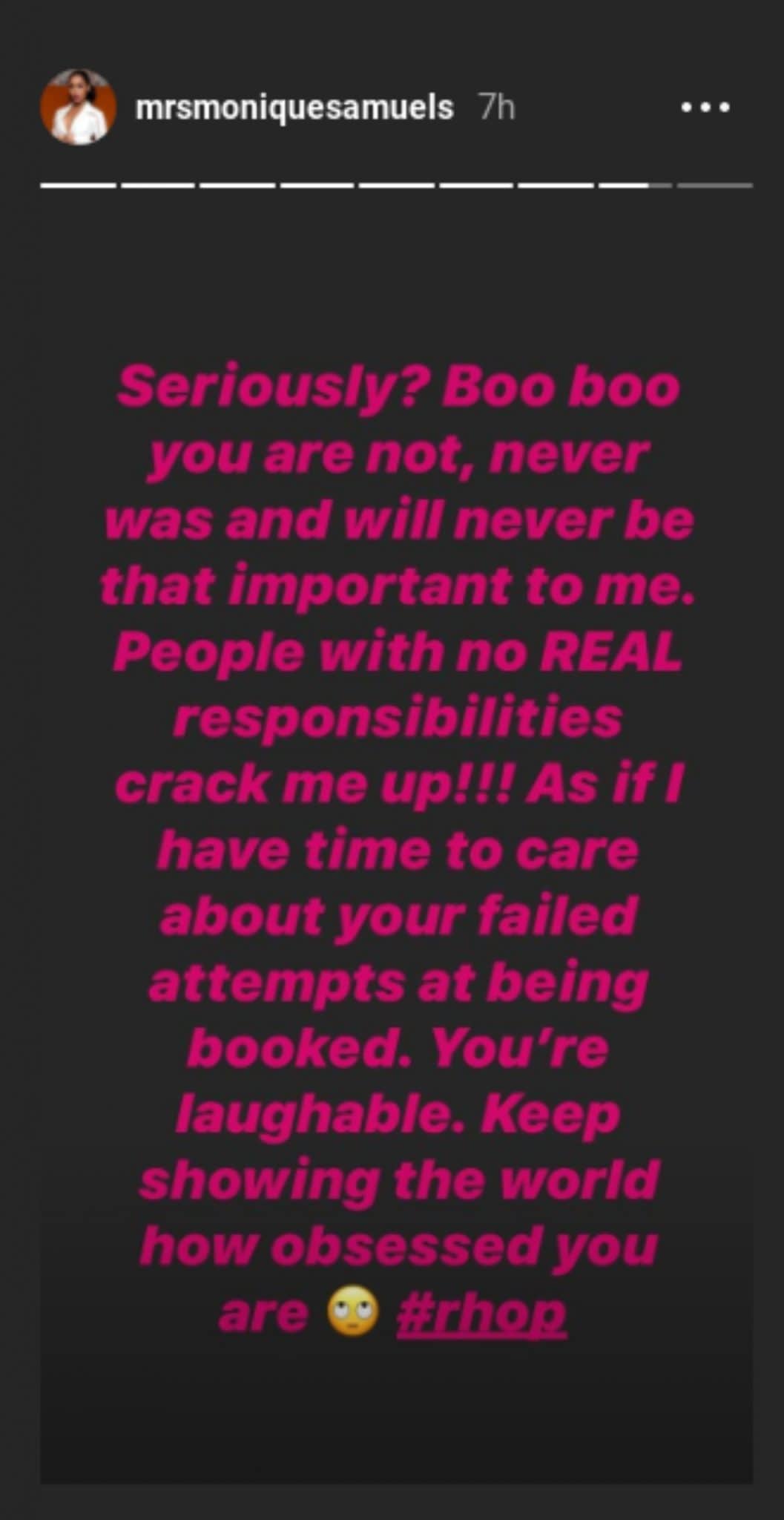 Monique then concluded with, “Let me holler at my attorney about this harassment and defamation of character.”