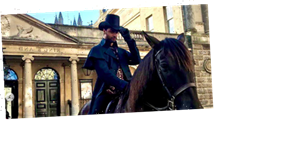 In case you missed the devastating news (KIM KARDASHIAN AND I ARE NOT OKAY), The Duke of Hastings, aka Regé-Jean Page won’t be returning to Bridgerton Season 2. And apparently he turned down a truly huge payday.

According to The Hollywood Reporter, Regé-Jean was asked to return to the series as a guest star for 3-5 episodes of the second season, and was offered $50,000 per episode (so, up to $250,000 total). But he turned this offer down because, tragically, The Duke’s time on the show was always meant to be limited. In fact, Season 2 is shifting focus completely to Anthony Bridgerton.

“It’s a one-season arc,” Regé-Jean previously told Variety, explaining that producers told him “It’s going to have a beginning, middle, end – give us a year. [I thought] ‘That’s interesting,’ because then it felt like a limited series. I get to come in, I get to contribute my bit and then the Bridgerton family rolls on.”

Lady Whistledown announced the news of Regé-Jean’s departure on Instagram, writing “Dear Readers, while all eyes turn to Lord Anthony Bridgerton’s quest to find a Viscountess, we bid adieu to Regé-Jean Page, who so triumphantly played the Duke of Hastings. We’ll miss Simon’s presence onscreen, but he will always be a part of the Bridgerton family. Daphne will remain a devoted wife and sister, helping her brother navigate the upcoming social season and what it has to offer – more intrigue and romance than my readers may be able to bear.”

Some good news? The Hollywood Reporter’s sources say that the door remains open to Regé-Jean returning for a potential third season of Bridgerton, so fingers all the way crossed.

Want more tea on all your favorite Netflix shows? Yeah. We know you do. You can find all of our entertainment coverage here.