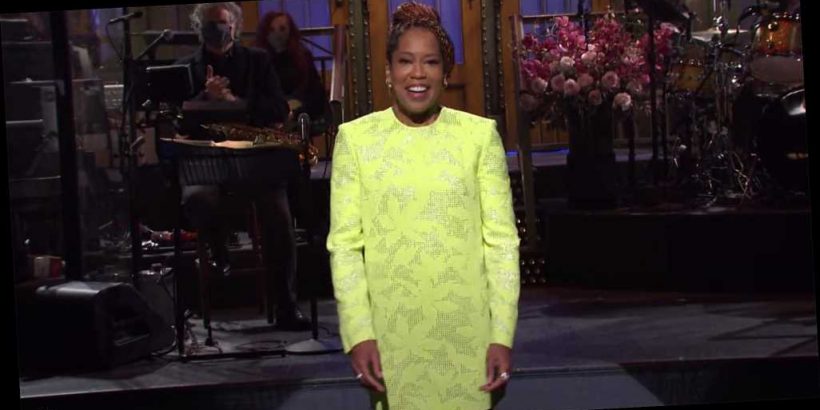 The Oscar-winning actress, 50, made her first appearance as a host on the NBC late-night sketch series this weekend while singer-songwriter Nathaniel Rateliff was the musical guest. Before the episode, King received some support from Dan Levy, who hosted the show last week for the first time.

"Regina! You got this! Much love, Dan," the Schitt's Creek co-creator and star wrote on a Post-It note that he left in the dressing room for King.

King shared a photo of the Post-It on her Instagram Story and wrote, "Awww. You're the best @instadanjlevy You crushed it! #snl." Levy then shared King's post on his own Instagram Story, writing, "Can't wait to watch you know it out the park this weekend. @iamreginking!"

King kicked off her episode with a lengthy monologue during which she raved about the first-time hosting gig. "I can't believe I am actually here hosting Saturday Night Live," she began. "I remember watching Eddie Murphy on this show when I was a little kid thinking, 'Wow, someday I'm gonna be on that stage.' Then he left and I was like, 'Hm, I'm good.' I'm kidding, it really is such an honor." "I've had a pretty wild career," she continued. "If you're Black, you probably know me from being in some of your favorite movies. And if you're white, you probably know me from Watchmen or this monologue right now. I'm not complaining, I kind of like it that way. Whenever Black fame gets too crazy for me I go to the nearest white town and I'm a regular old suspicious shopper again."

King went on to say that she was "actually nervous" and said she even asked SNL creator and producer Lorne Michaels for some advice before the show. "He said, 'Don't panic, when in doubt play the race card.' Then he did a little shoulder shimmy and moon-walked out of the dressing room. He's an interesting guy," King quipped.

Kenan Thompson then joined King on the stage to support the actress before the pair mentioned King's movie One Night in Miami, for which she earned a Golden Globe nomination for best director.

Thompson and King also starred in the "Gorilla Glue" sketch, during which the duo played two lawyers in a commercial dedicated to suing the makers of Gorilla Glue. Ego Nwodim, Chris Redd, Cecily Strong and Punkie Johnson also appeared in the skit.

The sketch comedy show kicked off its 46th season at the NBC studio in Rockefeller Center in October, after having to conclude the previous season with virtual episodes amid the onset of the pandemic.

The next episode of Saturday Night Live, which will be hosted by Bridgerton star Regé-Jean Page with Bad Bunny as the musical guest, airs Feb. 20 at 11:30 p.m. ET on NBC.