When you step out of the elevator at the corporate headquarters of CBS in Los Angeles, on the appropriately named Television City lot, staring back at you are the key brands of the $US23 billion US studio's global business.

There, nestled between CBS Television Distribution and the cable channel Showtime, is the logo of Network Ten Australia, our youngest commercial network and, in a curious fulfilment of its historic affection for US content, now our first American-owned commercial network. 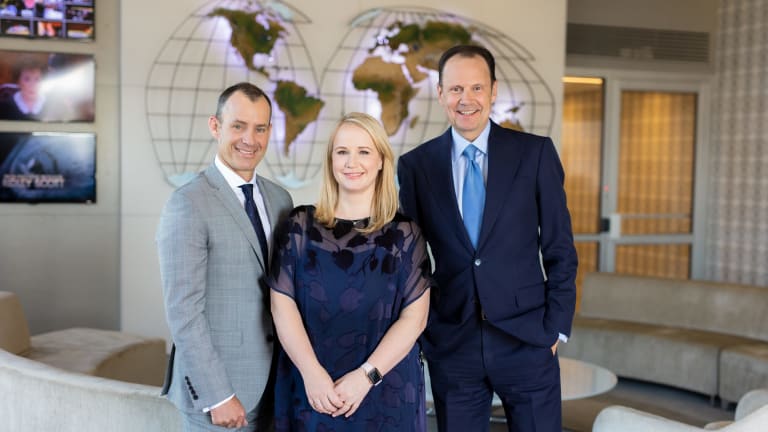 As the first anniversary of CBS' acquisition of Ten approaches – the deal was finalised on November 16, 2017, after the network spent five months in the financial wilderness – its American owners say the one-year report card is one of "optimism and excitement."

"We have accomplished a lot in a relatively short period of time and that said, I feel like we're just scratching the surface," says Armando Nunez, the president and CEO of CBS Studios International, who oversees the Ten operation. "We have invested in a legacy Australian asset that has a lot of room and opportunity for growth and for the future.

"There was a feeding frenzy from a media perspective [when the deal was done] and I think there was an expectation like the next day that things were going to look and feel different," Nunez adds. "As I've said repeatedly, this is an evolution, not a revolution."

In historical terms, the deal was stunning. When the network was placed in receivership, CBS was among its largest creditors, owed more than $800 million. And yet, as Lachlan Murdoch's Illyria and Bruce Gordon's Birketu set out to take over the business in a move many predicted would see it folded into Foxtel, CBS sideswiped them out of the race.

The Illyria-Birketu package was worth more than CBS', but Ten's own staff, bruised by a decade of poor board leadership, had saved one final humiliation for their former owners: they used their superannuation-powered creditors vote to overwhelmingly support the CBS bid.

In the year since, Ten has realigned a number of key pieces on its chessboard.

Though it still faces revenue and ratings challenges, it has launched Ten Daily, lost the cricket rights, acquired the rights to the Melbourne Cup racing carnival and will launch an Australian version of its US streaming platform CBS All Access by the end of the year.

Critically, it has brought its advertising sales business back in-house, reversing a decision by Ten's previous owners to outsource it to the News Corp-owned Multi Channel Network (MCN). CBS has also launched a commercial production division Ten Imagine and a commercial partnership business Ten Effect.

"At the end of the day when you look at the marketplace, to house 100 per cent of our revenues dependent on a third party company was an unusual situation to begin with," Nunez says. "No disrespect to MCN, because they did a very good job, [but] it was more of a feeling that we need to be in control of that, we need to be able to manage that.

"It's a relatively simple equation: [you are] creating content which is going to engage and be relevant with Australian viewers, and on the other side, it's about monetising that and monetising every eyeball, irrespective of how they view it," he says. "It makes sense that you have to control your revenue streams."

It's a relatively simple equation: [you are] creating content which is going to engage and be relevant with Australian viewers, and on the other side, it's about monetising that and monetising every eyeball, irrespective of how they view it.

Though much of the discussion of Ten's post-CBS fortunes in the Australian media focus on audience share and sports rights as though they are new issues, both have been challenges for Ten since its birth in August, 1964, and in particular during the 1990s as it emerged from its first commercial rebirth.

At that time, a largely sport-less Ten was Australia's most profitable commercial network.

Nunez says CBS is taking a long game view. "We have a budget, we look at it on a fiscal year basis and this year we'll have a pretty good year," he says. "But this is a business that requires more foresight and both strategic visibility and investment than just this year.

"The decisions that we're making from a content investment perspective hopefully bear fruit for next year; the idea is that it bears fruit for years to come," he says. "Not withstanding the quarterly pressures and yearly pressures that we all have in terms of managing our business from a shareholder perspective, you've got to look at this a little bit longer term. I think we're in a pretty good place."

The lack of a major sport – the national significance of the Melbourne Cup aside – remains a major issue for Ten. The network's CEO, Paul Anderson, says Ten still believes "sport is an important part of what we do; I think it's a really important part of the sales guy's toolkit."

But, he notes, as the cost of sports rights soared in a flurry of changing hands earlier this year, "we had to change. The Melbourne Cup is good example of what a new sports deal looks like," he says.

Equally challenging is Ten's segment of the commercial television audience pie, and its relationship to the network's revenue. In order for the latter to lift, the former must change. Ten has commissioned new (and some recycled) content, including Chris & Julia's Sunday Night Takeaway and reboots of Dancing with the Stars and Changing Rooms.

Ten commands an impressively disproportionate share of the national conversation, as the Honey Badger-powered season of The Bachelor – and its unprecedented finish – demonstrated. It also opened its commissioning headspace to the audience, with a "pilot week" from which at least three shows will be green lit, network programmer Beverley McGarvey confirms.

McGarvey says CBS' ownership of Ten has critically brought clarity of purpose to the embattled broadcaster. "When you put all of that together, I think, when people come to pitch to us we know quite quickly whether we're interested in their show," she says.

At the heart of Ten's existential angst is the question of who it is aimed at: is it once more the youth network that it was in the 1990s, or is it hoping to turn the Seven-Nine split of the broader demographic cake into a three-way game.

"Ten has been a lot of things over a number of years and I think the one criticism would be that we have waxed and waned between a number of those demographics," Anderson says. "The numbers we have now, our rankings, say that we are fairly and squarely an under-50s network. And our shows resonate with those demographics."

McGarvey agrees under-50 has become the network's sweet spot, noting that many of the network's rusted on viewers are simply the 16-39-year-olds of the past who have grown up with the habit of watching Ten and its entertainment-focused content.

"What you'll see now is our content is really targeted at the under-50s audience, rather than the under-40s audience," McGarvey says. "Even when we commission shows like Dancing with the Stars, I think the interesting thing about that is how we will make it. It's a show that can appeal to many different audiences, it depends on who your stars are, the music choices, the tonality of the show."

The bigger picture, says Nunez, is that Ten, like all broadcast television businesses, must "continue to be relevant, to continue to be engaged, [and] have the kind of programming that the press write about the next day, whether it's MasterChef, or Survivor. There's a long list of content which we're very proud of that has proven that it's done just that."

The next step in CBS' Ten strategy will be the launch of a subscription streaming platform, likely named Ten All Access. With Netflix and Stan dominating what looks to be a tight local streaming market, and Foxtel's Presto having fallen by the wayside, Nunez is unfazed.

"Australians have always had a very healthy demand for television programming," he says, noting that a subscription streaming business is the one piece missing from the jigsaw of Ten, Eleven, One, Tenplay and Ten Daily.

"It fits very well into the existing platforms of content," Nunez says. "The subscription offering is going to evolve with time; you're just not going to flip a switch and become Netflix overnight."

Nor, he says, will CBS tilt its business away from content distribution, meaning the agreements with local platforms such as Stan (which owns its Showtime content) will remain in place.

One year in, for Nunez, the takeout is simple: "We're just getting started."