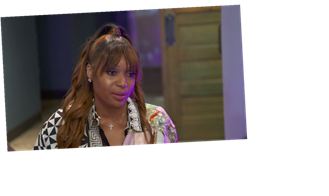 And to all a “goodnight, fake-a** b***hes!” That’s Marlo Hampton’s message to her The Real Housewives of Atlanta co-stars in ET’s exclusive sneak peek at Sunday’s all-new episode. The ladies are still on their girls’ getaway in New Orleans, when a dinner with Big Freedia (yes, the rapper/bounce artist) takes a nasty turn. It all starts when Kandi Burruss calls out Marlo for unnecessarily inserting herself into the ongoing drama between Porsha Williams and Kenya Moore, just because she recently repaired her relationship with Kenya. It seems Porsha is unwilling to trust Marlo now due to her connection to Kenya, who has refused to drop her inquiry into the alleged sexual activity between Porsha and Bolo, the stripper who performed at Cynthia Bailey’s bachelorette party in Charleston, South Carolina.

“Both of y’all — Porsha, I love you to death,” Marlo announces to the table. “[Kenya] would never be able to have me cross you in no kind of way. Kenya, I’m moving baby steps with you, but I love where we’re at and it feels good.”

Kenya isn’t having it, though, adamant that Porsha slept with Bolo and anyone who is willing to let that slide without Porsha’s confirmation isn’t “telling the whole truth.”

“Porsha told me it did not happen and that’s what we’re going with,” Marlo tells Kenya, who then says Marlo is making this “messy” by airing it all out in front of Freedia… even though no details have really been spilled. Marlo says, fine, leave Freedia out of it and just have a conversation woman to woman between Porsha and Kenya to squash the whole thing once and for all.

Watch the heated exchange for yourself here: