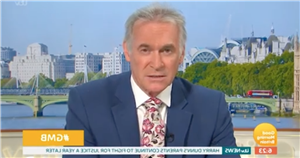 Richard Madeley clashed with Dr Hilary Jones on Good Morning Britain over the suggestion that ‘Freedom Day’ on 21 June should be pushed back.

Currently, government plans are still in place for lockdown restrictions to lift on that date, despite an increase in numbers, and Covid variants making their way to the UK.

But Dr Hilary thinks that everything going back to normal on 21 June is too optimistic, and that it should maybe be pushed back a bit further, even if it is a ‘nuisance’ to the public.

The news didn’t go down well with Richard, who said: “It’s more than a nuisance!

“So if you were Prime Minister you would be saying at some point in the next 48 hours, ‘Sorry everybody, but you’re stuck with this for the foreseeable. You’re going to be living with this through the summer, into the autumn and possibly as long as Christmas until every last person, who is willing to be jabbed?’

“It is a big ask – it’s a pandemic,” Dr Hilary responded. “It’s the biggest health threat for a hundred years. So we have to take it seriously.”

Referring to what’s happening in India, the medical pro explained: “They’re getting lots of hospitalisations in children who’ve recovered from Covid and have now got this inflammatory disease. Now that’s largely due to the Delta variant that originated in India.

“If we’re complacent about this and let that run rampant through the UK, we’re back to square one.

“All I’m saying is, be a little bit more patient. I know it’s been 18 months, everyone wants their jobs but we’ve got to take this seriously.”

He added there was a lot about the virus that the public don’t understand, and with its consistent revolution and new strains getting discovered, things could get complicated.

His comments come as Sir David King, the former chief scientific advisor, revealed he believed that a lockdown extension was inevitable.

Sir King, who chairs the Independent Sage Group, told Sky News: "The number of people in our hospitals, which the Government says is relatively stable – it's 932 per day going into hospital, which is up 65 from last week.

“It's not actually stable, it is slowly rising. What all of this means is that intensive care is needed for a significant proportion of our population today.

"I'm very reluctant to say that we should not go out of lockdown on 21 June, but I think the figures are in now, and it will be wise for the Government to announce right away a delay in opening, just so that we can all plan for the post June 21 period."

He added the government and Boris Johnson should be governed by ‘data, and not dates’.