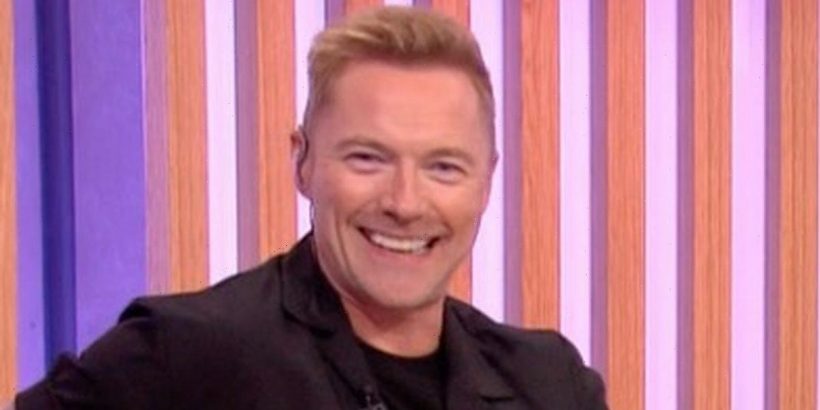 Ronan Keating was teased by co-host Rylan during Thursday's The One Show after he left fans distracted over his outfit.

During the episode, Ronan, 44, opted for beige trousers, however, due to certain camera angles, it left viewers questioning whether he was actually wearing any pants at all.

After causing a furore on Twitter over his outfit, Rylan addressed the comments as he read out a tweet from one fan who said: "I'm watching The One Show for the first time and why is Ronan Keating not wearing any trousers?"

To which Ronan burst out laughing as he exclaimed: "What?" with Rylan teasing him as he quipped: "No, they're just beige, they're beige! I did try to get him not to but he insisted on beige."

Viewers had shared their own confusion over the trousers as they took to Twitter to question the item of clothing.

One person said: "Just for a fleeting moment I thought Ronan Keating had forgotten to put his trousers on! #TheOneShow," followed by laughing emojis.

Another follower commented: "Where are Ronan’s trousers ?? #theoneshow @ronanofficial @Rylan."

While a different viewer added: "Just turned over to #TheOneShow & wondered why the hell Ronan Keating wasn't wearing any trousers."

It comes after Ronan's wife Storm shared a relieved update on Thursday 23 September after their son Cooper was rushed to hospital last month. The pair were “worried sick” about their little boy, as Ronan shared a number of snaps of Cooper from his hospital bed at the time, including a picture of the child wearing an oxygen mask.

Thankfully, Cooper is now back home safe and sound and Storm told fans that was "48 hours we are happy to see the back of".

“Thank you to everyone for your prayers and well wishes – they worked (!)” the fashion star continued.

“Because our little man is on the mend and on the way home too.

“Huge thanks to all the wonderful staff @chelwestft who were simply amazing.”

Storm went on to talk about how overwhelming it has been worrying about her little boy, though it is not known what actually happened to Cooper.

“This mummy is exploding with joy and relief to be bringing @cooper_keating home with daddy,” the star added.

The One Show continues on weekdays at 7pm on BBC One.

Stay up to date with all the latest on Ronan Keating by signing up to OK!'s daily celebrity newsletter.