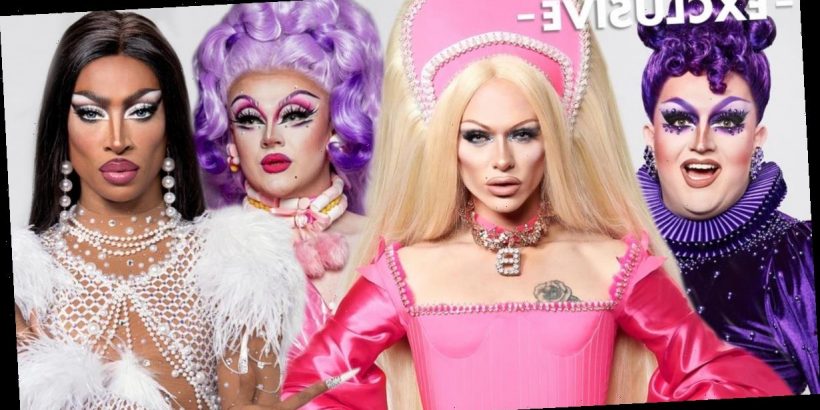 At the start of January, most people across the country had never heard the names Bimini Bon Boulash, Ellie Diamond, Lawrence Chaney and Tayce.

Fast forward 10 weeks and they are the UK's four most talked about drag queens, fighting for the crown in the grand finale of the second series of the British version of RuPaul's Drag Race.

Bimini, 27, Ellie, 21, Lawrence, 23, and Tayce, 26, have each had their highs and lows during the contest. Bimini has gone from lip syncing "for their life" during the first episode to winning the most challenges, beating Lawrence who, in turn, has been ordered to fight for her place in the competition. Tayce has landed in the bottom two a record-breaking four times, whilst Ellie — the only contestant not to win a challenge — is also the only finalist to never have to lip sync.

Ahead of Thursday night's finale, each of the remaining queens sat down with OK! online to discuss their time in the competition and how they are adjusting to their newfound fame. Discussing how they have become the firm fan favourite, Bimini – who identifies as non-binary – says: "I think people have related to me because I never walked in there and said, 'I'm a comedy queen, I'm a fashion queen,' I actually just said I was vegan.

"I never went in telling people I was going to be good at something, I never set myself up for failure in that sense because if you're telling people you're good at something and then you don't do it… I'd rather people followed my journey and see that I started at the bottom and then started doing well in challenges, and then I started winning them and people start rooting for that because you're climbing the ranks and it's not what people expected."

McDonald's drive-thru worker Ellie recognises how lucky she is to reach the final as the only contestant to not win a main challenge, whilst Tayce has won one, Lawrence has scored three, and Bimini has racked up four wins.

She said: "The thing with the badges is that I was so close to winning on four different occasions. There have certainly been times that I have been inching there and it just so happened that it slipped through my fingers and went to someone else, which isn't a bad thing, I'm not bothered. "RuPaul obviously sees something in me, she sees potential there and that there's something magical about the experience of the Diamond, she must like something, and I've been lucky enough to stay which is amazing."

Ellie's fellow Scottish queen Lawrence Chaney has been the subject of horrific trolling during her time in the competition — even having to delete her Twitter account in the process. However, she has found comfort in her fellow competitor Sister Sister, who previously opened up about the abuse she has received. Lawrence explained: "There is solidarity in shared experiences, so I always try to see the good in things. I'm like, right, Sister's been through this so I can trust her, she knows what the game is.

"That goes for everybody, famous or not, on a reality show or not, we are all effected by social media because that's all we've got right now."

Tayce, who performs in drag collective Gals Aloud alongside last year's fourth place queen Cheryl, has been dubbed a "lip sync assassin" after being saved from the bottom two by RuPaul four times. "It feels amazing. That is what I love to do, I love to perform. There's comedy queens, there's seamstresses, there's designer extraordinaires, but I am a performer through and through.

"There's nothing that makes me happier than being on stage, so to be able to get up there and show my stuff not once, not twice, not thrice, but four times – especially to songs that aren't even really my thing. Everyone that knows me will expect me to do a Janet Jackson, a Ciara, something like that, but I'm doing Jess Glynne and Steps, making it work and I won them!

"But the mind games of it all… you lip sync once, okay, you lip sync twice, you're usually going home, thrice, you're definitely going, so to lip sync a fourth time and stay it's like, 'Do you want me here or not? You're making me lip sync so many times but you're keeping me. So do you just like the show, do you just want the performance or am I that bad?'," she finished.

The final of BBC Three series RuPaul's Drag Race will air on Thursday at 7pm, with the full series available to watch exclusively on BBC iPlayer.