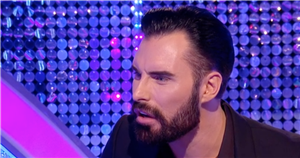 Strictly: It Takes Two presenter Rylan Clark wasn't impressed with Kym Marsh's comment after she claimed to be suffering from "imposter syndrome".

But when they spoke openly about Kym's confidence, Rylan was upset when she admitted to feeling like a fish out of water on Strictly.

Kym said: "I do have a bit of imposter syndrome but I have to…"

Cutting her off abruptly, Rylan chimed: "You're Kym Marsh from Hear'Say, what's wrong with you?"

As the studio audience and Graziano cheered along, Rylan added: "On that note, I've got the hump, give it up for Kym and Graziano!"

Earlier in the programme, Graziano also sang Kym's praises and told her just how elevated her felt regarding her improvement in the compeition.

He said: "I would like to say to my partner here. First of all I'm extremely proud of you.

"No matter what is going to happen tomorrow, I know this is a challenge for you personally because other than your job and everything, this is a challenge where you're doing something that it is out of your comfort zone and your challenging yourself.

"But you need to see with your real eyes because sometimes she doesn't see what she is.

"She says like 'I'm horrible, I don't know how to do it' and I mean like, I ain't done an operation in my eyes I can see very well!

"You're doing brilliant and that's the challenge. That is where we are aiming for. The confidence," he explained.

Last week, Kym and Graziano ended up in the dreaded dance off alongside Matt Goss and Nadiya Bychkova.

However the judges decided to save Kym and Graziano.

Since leaving the compeition Matt said: "I really feel a deeper connection with this country and the people

"The messages they’ve left for both myself and Nadiya in the last 24 hours have been unbelievable, it’s touched my heart so deeply."