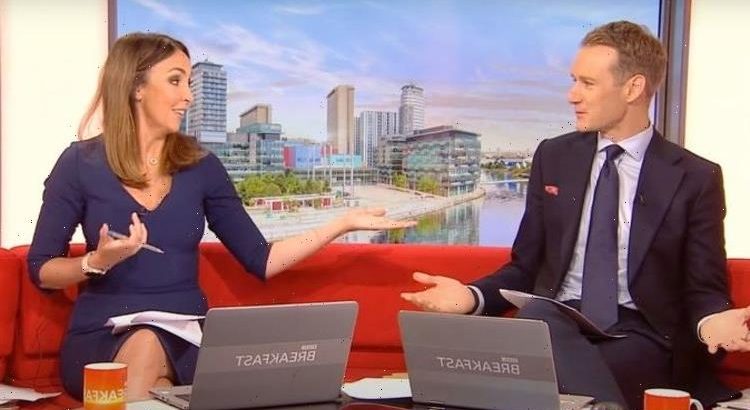 t home on the BBC Breakfast sofa, Dan Walker’s new co-host is journalist and presenter Sally Nugent. She has revealed that Dan is the “perfect colleague” and that their 20-year friendship helps their onscreen dynamics.

Now joining the team as a regular BBC Breakfast presenter Sally, has been with the BBC for almost a decade as a sports presenter and has 25 years of experience as a journalist.

The mother-of-one has opened up about her more permanent seat on the morning show, and after yo-yo-ing between news and sports for many years, she is excited to be a staple to the news programme.

Now working alongside her friend of 20 years, she said to Radio Times: “He’s the perfect colleague because he knows when to talk, when to listen and when to laugh.”

With the former post holder sharing advice to help more with the lifestyle that comes with the show, eating right, getting sleep, Sally, 50, welcomed Dan sitting at her side.

Read more: Brenda Blethyn was left ‘devastated’ when husband ‘fell for someone else’

“Live TV isn’t scary – it’s the best fun in the world – and I trust Dan completely,” she continued.

Her sport and guest presenter role has now developed, and it’s telling people’s stories that attracted her to the role.

She added: “When I was doing sport on Breakfast, I was always interested in telling people’s stories, and that’s what you try to do wherever you’re sitting on the sofa.

“We want to tell stories that engage people and perhaps even make them a little bit late catching the bus to work!”

Loyal viewers of the show seem to be happy with the addition to the team, with several taking to social media to share their praise for her interview style.

John echoed that sentiment: “An absolute grilling from Nugent there.”

Sally’s keen fashion sense also gains a lot of traction on social media platforms, with viewers tweeting screenshots of their favourite outfits that she has worn and commenting on her daily wardrobe choices.

“@BBCBreakfast @sallynugent My wife want to know where you got your dress from for this mornings show as she really likes it,” fashion-forward Chris asked.

Kevin was a fan of her footwear, tweeting: “Lovely shoes, did you see Sally Nugent in hers this morning? Very nice.”

The new job does mean that she has to adapt her home life to make sure she gets enough sleep ahead of the morning show.

Her 3.40am wake-up alarm has seemed not to impact her impeccable fashion sense based on fans’ reactions to her on the show.

She did divulge that her bedtime is 9.30pm unless she feels “rebellious” and stays up to watch Newsnight.

Starting in sports journalism, the TV presenter also exposed that she was often the only female in the room when it came to press junkets.

“I wouldn’t change my experiences for the world, but I do hope it’s easier for other women now,” she commented.

Dan and Sally can be seen hosting the show Monday through Wednesday, with Naga Munchetty and Charlie Stayt helming the show Thursday through Saturday.

BBC Breakfast continues weekdays at 6am on BBC One.