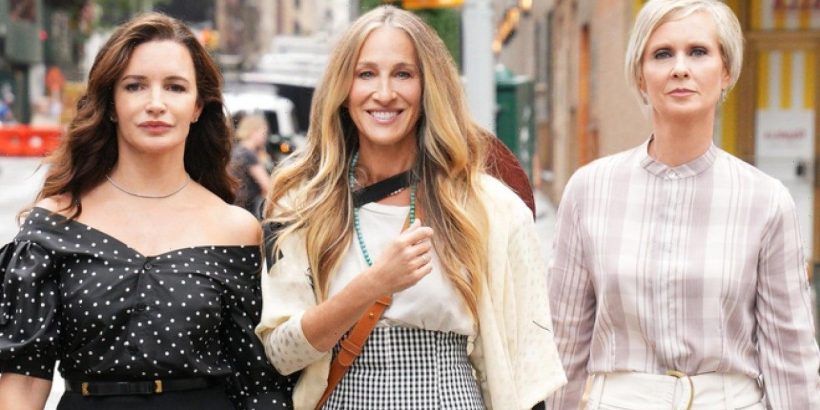 And Just Like That… filming has begun. HBO Max has shared the first official photo from the highly anticipated Sex and the City reboot, with Miranda Hobbes (Cynthia Nixon), Carrie Bradshaw (Sarah Jessica Parker), and Charlotte Yorke (Kristin Davis) looking as stylish as ever!

In the pic, Nixon has gone blonde and is sporting high-waisted white slacks, a striped shirt and a large cream-colored belt that matches her clutch and heels. Meanwhile, Davis is wearing a polka dot, off-the shoulder top, paired with a black pencil skirt and heels. As for Parker, she’s in a trendy high-waisted striped skirt, a white blouse, and black Mary Jane-inspired heels. 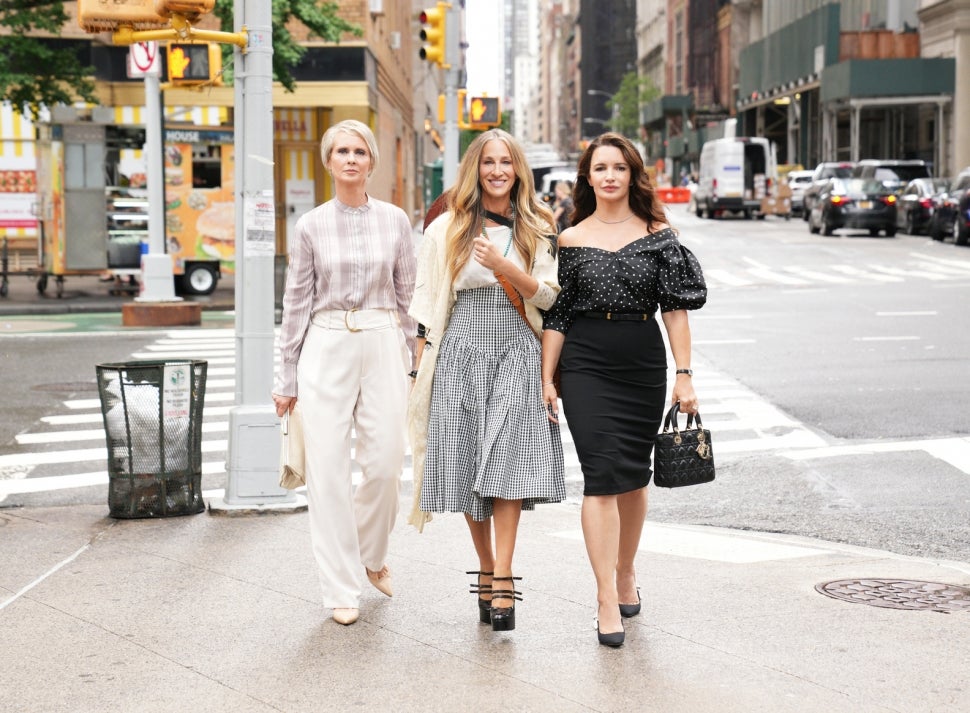 Leading lady Parker also took to Instagram on Friday to share a pic of herself in the hair and makeup trailer to mark the first day of filming.

In the photo, Parker’s face is obscured by hair products, as two people work to turn her into Carrie Bradshaw once more. The 56-year-old actress starred as the writer on the beloved series throughout its six season run on HBO, which came to an end in 2004. Two movie sequels followed, one in 2008 and the next in 2010.

“7:15 am EST NYC @justlikethatmax,” Parker captioned the pic from the And Just Like That… set. “Here she comes. X,SJ”

A day prior, she posted a photo of her “must-haves” while filming, which included lots of books and snacks.

The show’s official Instagram page also shared images from the first day of filming, giving fans a peek at the makeup on set, the costume department and two directors chairs.

Davis reposted the show’s pic of makeup to her Instagram Story, writing, “IT HAS BEGUN”

In addition to Parker and Davis, Cynthia Nixon has signed on to the reboot and will once again play Miranda Hobbes. Chris Noth will return as Carrie’s husband, Mr. Big, while John Corbett, Willie Garson, Mario Cantone, David Eigenberg and Evan Handler are also set to reprise their roles. Kim Cattrall, who played Samantha Jones on the series and in both movies, will not be a part of the reboot.

The sequel series will pick up as Carrie, Miranda (Nixon) and Charlotte (Davis) navigate their 50s, but the cast won’t all be Sex and the City regulars: Sara Ramírez joins the ensemble as a queer podcaster named Che Diaz, one of a number of new regulars who are expected to be women of color.

Watch the video below for more on the highly-anticipated reboot.