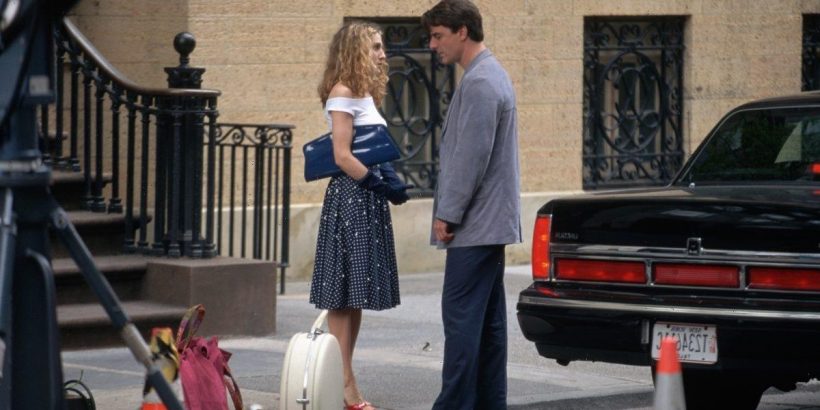 It has been 25 years since Sarah Jessica Parker first strutted down a Manhattan street as Carrie Bradshaw in Sex and the City. The character has changed and developed over the intervening years. She’ll be going through yet another metamorphosis when And Just Like That… premieres on HBO Max in December. As the character has changed, so has Carrie Bradshaw’s hair. Do you remember all of the iterations of the fictional character’s hair game? Perhaps more importantly, are you ready for what’s to come?

Season 1 of Sex and the City was a bit different than subsequent seasons in several ways. Season 1 found Carrie breaking the fourth wall by chatting with her audience. At the time, she considered herself a “sexual anthropologist” who roamed the streets and interviewed her friends about their sexual preferences and exploits. Her hair matched the bold nature of her job description. Carrie wore her dirty blonde hair in a shoulder-length style. She let her curls flow freely, and they quickly became a signature of the character.

As season 1 progressed into season 2, Carrie’s hair got longer and a bit blonder. The production team gave up the documentary-style filming and jumped into a more traditional form of storytelling. Carrie continued to wear her hair curly, but her curls were looser and a bit romantic, rather than bouncy and sassy.

Carrie started wearing her hair straight during her second relationship with Mr. Big

Around the time Carrie hooked back up with Mr. Big in season 2, she pulled out the straightening iron and tamed her curls into sleek styles. Sometimes, she let the straight tresses fall down her back, and other times she swept them up into a slick ponytail. The hairstyle, argue some fans, felt like a way of Carrie fitting into Mr. Big’s world.

The theory does hold water. In season 2, Mr. Big reveals his big engagement to Natasha, a 20-something woman he met in Paris. While venting to her friends, Carrie acknowledges that her curls signify her wild side, which ultimately made her incompatible with Mr. Big.

‘Sex and the City’ fans noticed Carrie went back to her curls when Mr. Big married Natasha

Once Carrie accepted that Mr. Big was a married man, she mostly ditched her straight hair in favor of her signature ringlets. She did, however, have a bit of fun with the sleek styles from time to time. When she met Aidan Shaw, she wore her hair curly. As she progressed into an affair with Mr. Big, she returned to a sleek, straight style. She bounced between long, romantic curls and slicked back ponytails through most of season 3 and season 4.

After a failed engagement in season 4, Carrie did what many women do after a breakup. She chopped off her famously long locks in favor of a short bob. While it was a drastic change for the character, it wasn’t a hairstyle that got a lot of love from Sex and the City fans.

Not to worry, though. Carrie didn’t keep the short ‘do for long. Over the fifth and sixth seasons, Carrie grew out her hair. Sometimes, she wore it in a choppy, straight bob, and other times she let her loose curls fall around her face. The color lightened up significantly until her move to Paris with Aleksandr Petrovsky.

Carrie’s hair returned to ringlets when Mr. Big rescued her in Paris in the series finale

Carrie’s original hair journey ended in season 6 when the series officially went off the air. By the time Mr. Big showed up in Paris to bring his love back to New York City, where she rightfully belonged, her hair had grown out significantly. Carrie returned to her season 1 and season 2 style of long, romantic ringlets. This time, though, her blonde locks were noticeably darker.

Carrie Bradshaw’s hair journey will continue in December 2021. Carrie and her pals, Miranda Hobbes and Charlotte York, will return to the small-screen in And Just Like That…, the Sex and the City reboot. Photos from the set show Carrie Bradshaw’s bouncing between severe updos and her signature curls, and fans have some theories about what it all could mean.