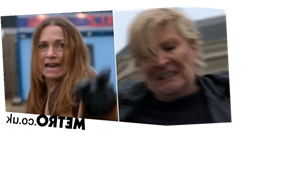 Shirley Carter (Linda Henry) was left in complete and utter shock in EastEnders, as she discovered Katy Lewis (Simone Lahbib) had abused Mick (Danny Dyer) when he was 12.

There was tension aplenty in the Carter household during tonight’s edition (January 11) of the BBC One soap, as Gray Atkins (Toby-Alexander Smith) discussed their options relating to Tina’s (Luisa Bradshaw-White) disappearance.

With Shirley hellbent on locating her sister, Gray decided to take action, as he texted her from Tina’s phone in an effort to cover his tracks.

Meanwhile, the police wanted to talk to Katy, and therefore she hightailed it out of her home and made it to Walford, before confronting Mick.

Mick was horrified to see her, following their heated showdown on New Year’s Day, and Katy was seething, as she berated him for calling the police.

The former landlord of the Queen Vic denied calling the authorities, and informed Katy that he doesn’t want anyone to know what she did.

Katy feigned emotion, arguing that she fears for Frankie (Rose Ayling-Ellis) and how she would cope if the truth came out.

However, as she further manipulated Mick, neither noticed that Shirley had entered the flat — no doubt having arrived to tell Mick about Tina’s text.

Katy hightailed it out of there, but Shirley was intent on vengeance.

Therefore, she followed the abuser out on to the Square, before punching her in the face, and kicking her repeatedly in the stomach.

Mick was seemingly horrified, and returned to the flat, as Shirley called the police — intent on reporting an assault.

EastEnders continues Tuesday January 12 at 7:30pm on BBC One.