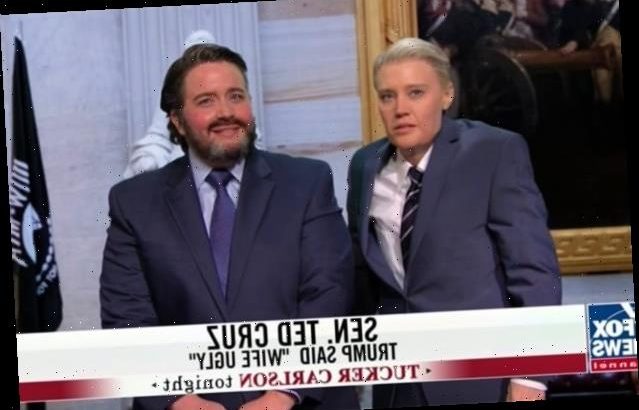 After two episodes in a row with cold opens curiously devoid of anything related to the most significant events of the current moment, the latest “SNL” finally acknowledged U.S. politics with a sketch inspired by the only thing people were really talking about this week — the second Donald Trump impeachment trial.

But it was done in a weird way — as a parody of an episode of Tucker Carlson’s Fox News show looking back on the impeachment. But it did have a few highlights — like Aidy Bryant’s absolutely brutal impression of Sen. Ted Cruz, and Pete Davidson as Trump impeachment Lawyer Michael van der Veen.

Alex Moffat played Carlson and he was joined at the start by Kate McKinnon as Lindsey Graham, with the two of them absolutely gushing about how much they love Trump.

Next up was Bryant, whose bit largely roasted Cruz for what has to be one of the most cowardly displays of any politician in recent memory — the fact that in 2016 Trump called his wife Ugly and Cruz didn’t really defend her but instead became one of Trump’s most loyal followers.

They were then joined by Mikey Day and Pete Davidson playing one Trump’s attorneys. This bit ably skewered the Trump legal team’s absolutely river of bad faith and misrepresentations in defense of Trump. This was followed by Beck Bennett as Mitch McConnell, here to defend McConnell’s logically nonsensical defense of his vote to acquit Trump.