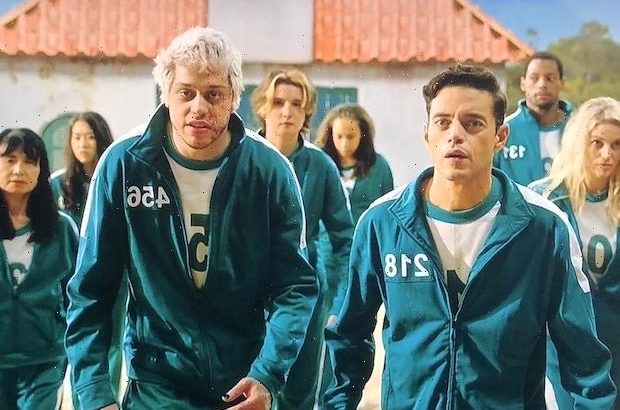 It took a couple of weeks, but NBC’s Saturday Night Live this weekend figured out its take on the pop culture hit Squid Game — by viewing the Korean Netflix drama through the lens of a country music video.

Pete Davidson and guest host Rami Malek led the sendup, first appearing as good ol’ boys crooning about rusted out Chevys, lost dogs and hateful exes. What to do when saddled with such a sad lot in life? “Guess I gotta play the Squid Gaaaame,” they sang.

From there, the two were transported from the countryside to the Squid Game barracks, where the lyrics said they “got a number, not a real naaaame,” and where they were watched over by guards whose masks were adorned with the same “symbols as a PlayStation” (as well as a host who looks like “Doctor Doom”).

Also popping up in the music video spoof were versions of the Gangster and wild-eyed Moll characters from Squid Game, as Davidson and Malek’s characters first navigated the super-deadly “Red Light, Green Light” playing field, followed by the “Glass Stepping Stones” round.

At one point, Malek’s character looked to the “piggy bank in the sky” and remarked (as we all did) in sing: “45 billion won/that’s a whole lotta moneyyy…. At least i think it is/I’m confused by the currency.”

Capping the spoof was a nice stinger about what the winning player (ill-advisedly) did with his won windfall.

What did you think of SNL‘s awaited take on Squid Game? (We’ll add video once it becomes available.) Was it on par with TVLine pitched last week, a version where Davidson’s Chad character is unfazed by the bodies dropping around him?

Grade Malek’s episode via the following poll, then drop a comment with your review.