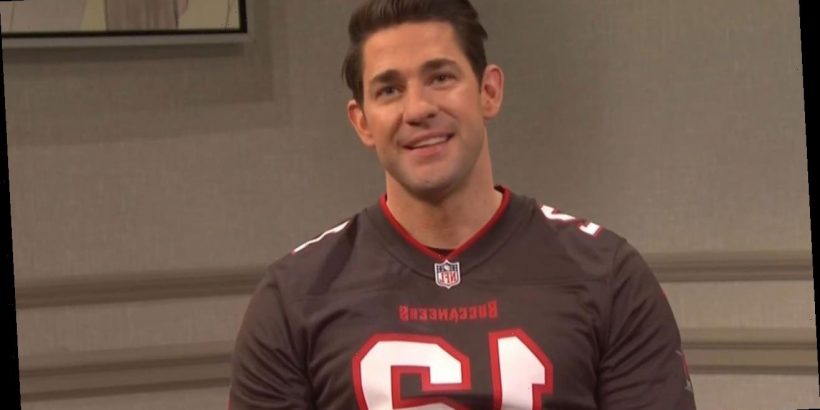 Saturday Night Live is back! The sketch comedy series returned after a very lengthy hiatus (during a very volatile few months) and decided to cover as much of what they missed all in one go, with a little help from host John Krasinski.

For the Cold Open, Kate McKinnon hosted the political talk show What Still Works, which McKinnon explained, “[It’s where we look at every part of American society and wonder, ‘What still works?'”

“It’s a new year and we have a new president, so some things should work. But do they?” McKinnon asked, before welcoming out a series of guests to discuss the state of the world.

“I believe the Parkland shooting was a hoax. The teachers were actors and the children were dolls,” Strong’s Greene said. “I believe 9/11as a hoax. Did anyone actually see it happen?”

Derrick Boner stopped by "What Still Works?" to talk stonks. Oh, and Jack Dorsey and Mark Zuckerberg stopped by, too. pic.twitter.com/eTY1vVd4IB

All of this cemented the idea that basically nothing is working in America — except for Tom Brady (Krasinksi), who recently made it to the Super Bowl for the 10th time in his career.

“You’re 43 years old, but you look 26… You went to historically one the worst franchises in football and in your first year, you took them to the championship game,” McKinnon shared.

“No, don’t even try it. None else believes there is anyone else on the team,” McKinnon replied. “My point is, you still work… You might be the only thing in America that still works. So I guess everyone must be rooting for you, right?”

“Almost no one,” Brady replied with a resigned grin.

“Well, you know what? I’ll be rooting for you, Tom Brady, because you’re the only god damn thing this country can still rely on,” McKinnon shared. “And it’s not like you’re a weird trump guy or anything, right”

After a long silence, Brady smiled and stood up, sharing, “Thanks for having me,” before walking off to cheers.

Turning to the camera, McKinnon concluded, “Thank you for watching What Still Works. I’ve been Kate McKinnon as myself, slowly losing my mind, along with all of you.”