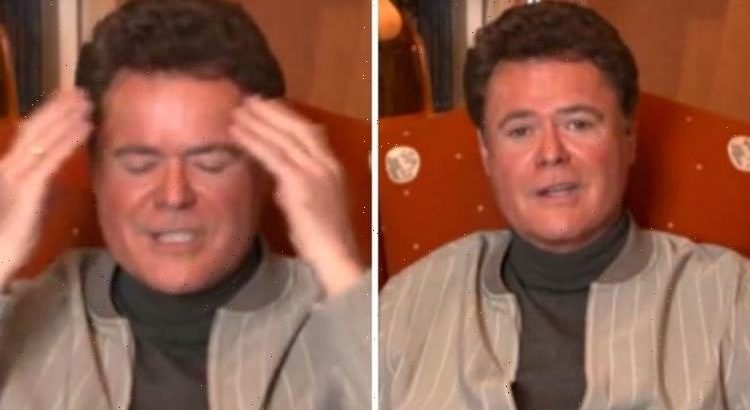 Donny Osmond discusses not being with his family at Christmas

Donny Osmond appeared on Monday’s instalment of Good Morning Britain to discuss his new single Let’s All Dance. The icon also detailed a heartwarming moment he experienced with one of his fans following a recent pantomime performance. During the ITV interview, the 64-year-old ended up revealing why he isn’t able to spend Christmas with his family this year.

Donny explained to hosts Charlotte Hawkins and Adil Ray: “Something happened to me two nights ago as I was coming out of the stage door.

“And there were fans there, some I call the puppy lovers, but there was a five-year-old girl there with her mother.

“And as I was leaving she had her mask on and I had my mask on.”

The star explained he pulled his mask down slightly to ask the youngster whether she had fun.

The singer added: “I wish I could just convey to you the joy in her face and I said, ‘Did you like Sam the puppet?’

“And to see a little five-year-old girl amongst all of the sadness that’s going on right now and to have that much joy in her face [was great].

“And to see her mother see her daughter have that much joy in her face was just so much fun.

“It was worth all of the work just to get that one show launched.”

The show Donny was referring to was Pantoland At The Palladium, which is being held at the London Palladium until January 9, 2022.

Charlotte chimed in: “And you’re sacrificing a lot to be there though as you’re not going to be with your family for Christmas as your over here doing panto.”

Donny replied: “I’m going to be on Facetime a lot on Christmas Day, and my wife and I decided to make people happy, make them laugh, and sing.

“Plus, I am over here promoting my 65th album too so that’s why I’m here.”

The pantomime is full of veteran panto stars as well as West End legends and singers.

The stars performing in the show alongside Donny include Julian Clary, Paul Zerdin, Sophie Isaacs, Nigel Havers and the world-famous Tiller Girls.

John said: “Donny, You were the only positive thing on TV this morning! Happy Christmas.”

Anthea added: “It was great seeing @donnyosmond on GMB.”

Tricia quipped: “@GMB Oh my!! I had Donny Osmond posters covering my walls as a teen… He is still lovely.”

Good Morning Britain continues weekdays between 6am and 9am on ITV.