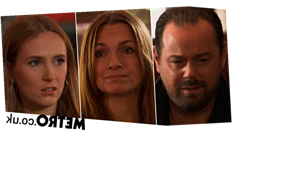 EastEnders fans have seen Mick Carter (Danny Dyer) come to the realisation that manipulative and abusive Katy Lewis (Simone Lahbib) was grooming and sexually assaulting him when she was his trusted care worker.

Mick was 12 when Katy took a twisted interest in him and since he came face to face with her after so many years, so many memories rushed to the surface, breaking Mick down and Katy was immediately at work again splitting him from his loved ones and making him feel alone and unable to speak out.

As Katy and Mick are set to have a huge showdown, with Mick finally confronting her over her abuse, his daughter Frankie (Rose Ayling-Ellis) is set to return to the scene – but will she help him see that Katy is a criminal and should be brought to justice?

Show producer Jon Sen explained: ‘We’ll see the ongoing effect of Mick’s abuse and with Frankie intertwined with the Carter’s evermore, she struggles now that the truth is out.’

A spokesperson added: ‘Now Mick has finally faced his demons head on, his confrontation with Katy will change everything but has he left it too late to save his marriage?

‘Plus the reappearance of a familiar face on the square helps him to connect to his new truth.’

Linda (Kellie Bright) will discover what happened to Mick but given she is considering starting a new life with Max Branning (Jake Wood), is it too late for her to help with his healing process?

And with Katy also facing losing her daughter Frankie, how hard will she fight back against the allegations? And will she seek to destroy Mick to protect herself?