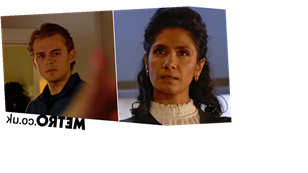 Viewers will know that passion of some degree ensued between Suki and Peter two weeks ago.

The Panesar matriarch enquired about the connection between Peter and daughter Ash (Gurlaine Kaur Garcha), but ultimately something transpired between she and Peter instead!

‘Personally, I can see exactly where Ash gets her looks from,’ Peter said at the time. ‘And her mouth’.

Suki stared at the young man. ‘You want to see how well I use it?’ she replied, leaving Peter with a rather large smile on his face.

The following instalment saw Suki tease Peter about what transpired the night before, informing him that she ‘enjoyed’ it.

She was unable to resist teasing the young man once more in tonight’s episode, as Peter called round to pick up Ash, who was in need of some cheering up after breaking up with Iqra Ahmed (Priya Davdra).

As Peter exited the Panesar household, Suki lifted her hand to her ear to emulate a phone, before saying under her breath: ‘Call me.’

Peter was taken aback by Suki’s gesture, which prompted her to tell him that she was joking.

However, her expression after he left would seemingly suggest otherwise!

EastEnders continues Friday January 22 at 8:30pm on BBC One.