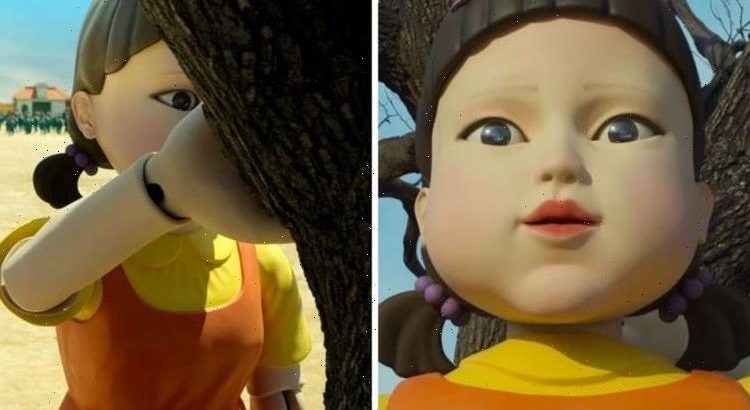 Squid Game has become an overnight success for Netflix, with viewers loving its unique storytelling and unforgettable set pieces. Arguably, the most iconic is the doll from Red Light, Green Light, the first episode of the show. However, what fans may not realise is that the doll is more real than it may first seem.

Is the doll from Red Light Green Light real?

Squid Game follows Seong Gi-hun (played by Lee Jung-jae), a man that is offered the chance to win billions of won if he beats a series of children’s games.

These games are far more dangerous than they first appear, as the price of failure is death.

It creates an absurd atmosphere as the violence of the challenges is met with the whimsy of the experience.

The first game in the show has become the leading image of the series as a whole, with one particular doll becoming larger than life.

The game in question is red light, green light, which gives the first episode its name.

For those unfamiliar, the aim of the game is to creep up on somebody without being seen.

One person faces away from a group, while the rest race towards them.

The challenge comes from the fact the main person can turn around whenever they want, and if they see you moving, you’re out.

The person in the show is a giant doll with cameras for eyes, only when it sees you, the challengers are gunned down on the spot.

In the show, the doll is clearly a real object and has not been created through the use of CGI.

In fact, the doll lives on beyond the show and is currently on display in a carriage museum in Jincheon country, South Korea.

One fan of the series took to Reddit to share a snap of the colossal doll, showing it still staring out blankly.

User Deadfermata wrote: “The giant animatronic doll is real, and it can be found in a carriage museum located in Jincheon county, South Korea.

“It is missing a hand as it was damaged during move.” (sic)

However, there appears to be more than one, with another fan noting a second doll in the Philippines.

User Randommesscool added: “There is also the same doll from Red light, Green light in one of the malls in the Philippines.

“It is fully functional. It is connected to a nearby crosswalk. It says green light, red light fast when the crosswalk light is green.

“It says green light red light and turns its head when the light of the crosswalk goes red. It was built around 2-3 days after Squid game was released.”

Clearly, this second doll isn’t the original from the show, but Netflix has not confirmed if the one in South Korea is the original either.

With a second season unconfirmed, it seems unlikely fans will get to see the doll back in action anytime soon.

Squid Game is available to watch on Netflix.