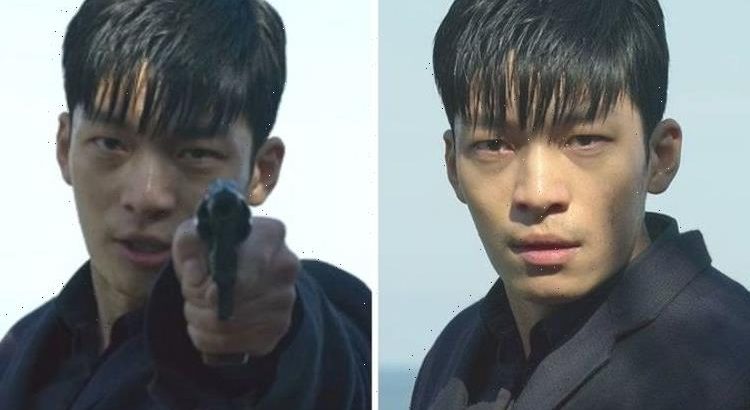 Netflix’s latest thrilling series Squid Game left fans in a huge frenzy after each episode of the twisted Korean drama. In the series, fans were introduced to police officer Jun-Ho (played by Wi Ha-Jun) who was on a deadly quest to find his brother. The actor hinted towards a potential season two where he spoke about his character’s fate.

Viewers were left on the edge of their seats after the unexpected season finale of Squid Game.

Throughout the series, fans were in shock as they watched a group of financially strapped contestants decide to take part in a competition with the chance of winning £28.2 million (45.6 billion won).

While the participants were forced to play childhood games to make it to the next round, what they didn’t realise was the process of elimination would be deadly.

In a twisted plot twist, whenever the contestants failed to complete the game in time, they would be shot dead and each death resulted in an increase in the cash prize.

After his brother went missing, police officer Jun-Ho gained an interest in the games and was able to gain access.

Dressed as one of the workers, Jun-Ho embarked on the deadly mission and despite arousing suspicion and almost meeting his demise he found his brother.

After observing the workers and participants he obtained enough evidence and the officer was ready to make an escape.

However, he was stopped by the mysterious Front Man, who was the founder of the games and the pair faced an epic stand-off at the edge of a cliff.

However, the biggest plot twist of all came when the Front Man removed his mask and revealed his identity as Jun-Ho’ missing brother.

The reunion turned deadly when he shot his brother and sent the police officer off the cliff, leaving fans questioning whether or not he survived the fall.

In an interview with Deadline, actor Wi Ha-Jun shared his hopes for his character and said: “I’m dying to know what happened to him.”

He explained: “I want him to return alive, find his brother and ask him tons of questions. As a brother, I would ask him sincerely as a detective, I want to explore the overall secrets behind the game as well.

The actor shared: “I really hope to see Jun-ho come back alive and explore all these questions, I hope to see a more brotherly-love side of their relationship as well.”

The finale saw Seong Gi-Hun abandon his plans to travel to America and stay in Seoul to hunt down the Front Man in an effort to permanently stop the games.

Some fans believe Jun-Ho could still be alive and the upcoming season would see the two come together to defeat Front Man.

Despite these hopes, Squid Game has yet to be renewed for a second season and its creator Hwang Dong-hyuk revealed he had no plans for a season two.

The series was advertised as a limited series and after taking Hwang 10 years to get on screens.

After a question about a second instalment, he told Variety: “It is quite tiring just thinking about it.”

With all the success surrounding Squid Games, it would be surprising if it doesn’t return with a second season, as it claimed the number one spot on Netflix in 90 different countries – within 10 days of its release.

Express.co.uk will remain updated with the latest news about its potential upcoming release.