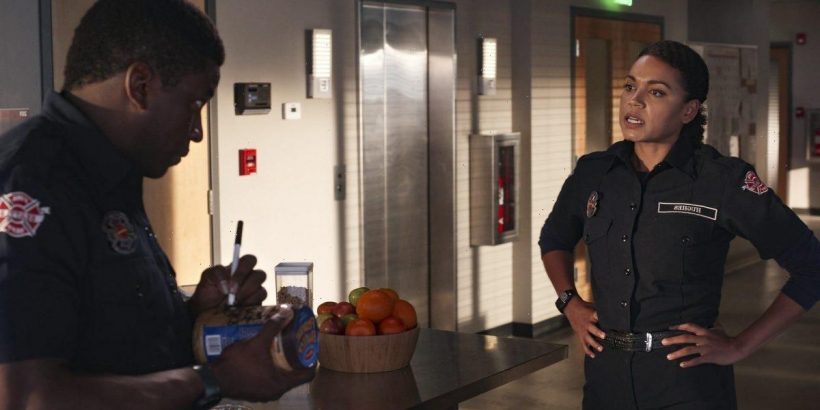 [Spoiler alert: This article contains spoilers from Station 19 Season 5 Episode 5, ‘Things We Lost in the Fire.’]

‘Station 19’ Season 5 Episode 5: Before the explosion

When Station 19 Season 5 Episode 5 opens, Theo Ruiz gets shot down when he tries to celebrate his first anniversary of dating Vic. Vic’s parents believe there is a curse if you celebrate that milestone before you are married.

Travis Montgomery’s (Jay Hayden) boyfriend, Emmett Dixon (Lachlan Buchanan), tries to talk to him about moving his ex-husband’s photo. However, Travis is too preoccupied with his father and mother’s relationship to listen.

Meanwhile, Ingrid (Lindsey Gort) returns to see Ben Warren (Jason George) at the fire station. She wants Ben to check out the burning plastic smell at her new shop. Ingrid admits that her husband died from carbon monoxide poisoning one year before her shop burned down.

Dean gives Jack Gibson (Grey Damon) a pep talk about his new big idea with Carina DeLuca (Stefania Spampinato). Gibson wants to create a clinic at the fire station for people who don’t want to go to the hospital.

Vic noticed on the schedule that Dean isn’t in the upcoming Crisis One Intervention training. He admits that the Oakland fire department made him an offer, and he’s “thinking very hard about it.” Vic proposes that Dean invite the other firefighters to him instead of traveling all over the country. That’s when a massive explosion shakes the entire fire station.

Captain Beckett (Josh Randall) and Robert Sullivan (Boris Kodjoe) argue over the best course of action at the explosion scene. There is a ruptured gas line, and Beckett realizes that things are going to get worse. Sullivan believes that he should shut off the valve because the response team is so far away. Robert and Maya head to the valve to attempt to shut it off before things get worse. Sullivan, Gibson, Miller succeeded in shutting off the valve.

Meanwhile, Vic Hughes is struck by a severed electrical wire while standing in the air on a fire ladder spraying water. Dean sees her and runs to rescue Vic. He performs CPR and saves her life. Vic also tells Dean she loves him before he heads back off to fight the fire.

Carina and Emmett talk about how horrible it is to be in love with a firefighter. They feel tortured all the time, but they try not to let their significant others know. They get a call from the scene to run there to help a pregnant woman. Emmett helps Travis transport Vic to an AID car nearby.

Captain Pat Aquino (Alain Uy), Dean, and Captain Beckett attempted to evacuate the neighboring houses. When Dean realized that one house might have gas building up inside, Captain Aquino opened the door before hearing the message. The explosion threw him into the air. Aquino is alive but has something stuck through his body. Dean Miller is unconscioius at the end of the episode. They provide CPR for 33 minutes.

According to IMDb, Station 19 airs Thursdays at 8 p.m. EST on ABC, before Grey’s Anatomy.