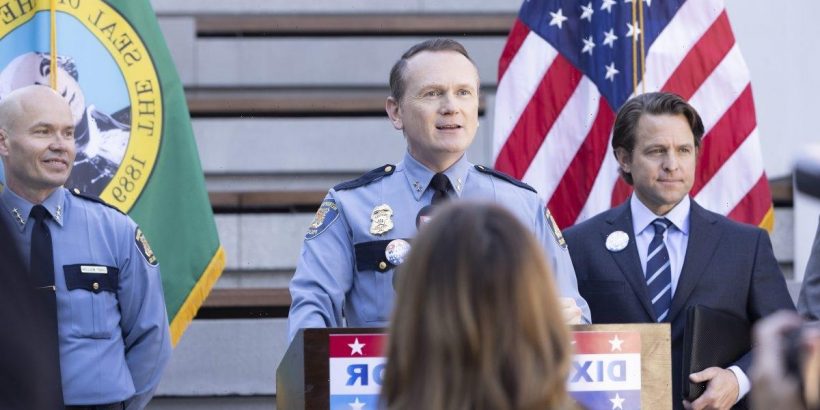 Pat Healy returns as Michael Dixon in Station 19 Season 5 Episode 16 of the ABC drama. The former Seattle Fire Department Fire Chief has a disturbing history of blackmail, fraud, and extortion. However, in the May 4 episode, Dixon runs for mayor. Here’s our recap of Michael Dixon’s appearances in Station 19 and why Pat Healy looks familiar.

Who plays Michael Dixon in ‘Station 19’?

Pat Healy has portrayed Michael Dixon since Station 19 Season 3. In episode 2, “Indoor Fireworks,” the fire department hired him to replace Lucas Ripley as fire chief. Although Dixon praised Station 19 in a press conference, he’s often undermined their intentions to save lives.

There are numerous reasons that viewers might recognize Healy. He’s well known for several films, but he’s also appeared in many popular television shows. According to IMDb, viewers might recognize Healy from Cheap Thrills (2013), The Innkeepers (2011), The Post (2017), and Compliance (2012). In 2021, Dixon appeared in the Amazon Original Them as Marty Dixon. He also portrayed Lester in the long-running Showtime series Shameless.

In the first look photo of Station 19 Season 5 Episode 16, Dixon stands at a podium in front of flags. He has a sign and a sticker that says, “Dixon for Mayor.” That photo, coupled with his conversation about his dislike for Station 19, indicates that he probably speaks out against Andy Herrera (Jaina Lee Ortiz) while campaigning for mayor.

Station 19 Season 5 Episode 16 preview exclusively features Andy’s arraignment and local news reports of her involvement in Jeremy’s (Daniel Di Tomasso) death. So, it makes sense that the police officer mentions her in his speech as part of his platform. He’s had it out for Station 19 since he became fire chief, so it doesn’t look like he’s about to stop now.

According to IMDb, Station 19 airs Thursdays at 8 p.m. EST on ABC, before Grey’s Anatomy.