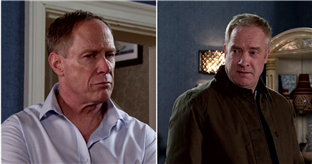 Stephen Reid (Todd Boyce) learns he needs to cover his tracks a bit better if he wants to officially gain the role of Coronation Street Serial Killer.

Murdering people is still pretty new to Stephen, as he’s still in the aftermath of committing his first kill – poor Leo (Joe Frost).

Leo’s life came to an end a few weeks ago after he threatened to tell the Platt family all about Stephen’s plan to steal Audrey’s (Sue Nicholls) sweet cash for his own benefit.

The confrontation resulted in Stephen hitting Leo’s head on the balcony and throwing him into a bin, killing him right away.

Leo’s missing suitcase and passport – stolen and destroyed by Stephen – left Jenny to conclude that he must’ve gone to Canada with out her after getting cold feet over their relationship.

Assuming her former partner is a stone-cold coward could be about to change, as this new video shows Jenny speaking with Teddy – Leo’s dad.

Teddy tells Jenny that it’s incredibly unusual for Leo to cut all contact for weeks and is planning on calling the police to see if they can look into it.

Also involved in the entire conversation is Stephen, who masks his panic and tries to make Teddy reconsider.

But what can he do to steer him off the scent?

Or are we about to call Stephen Weatherfield’s Worst Villain?