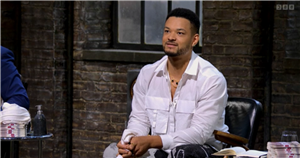 On Thursday (January 5), the new series of the hit entrepreneurial BBC One show kicked off with a bang as Deborah Meaden, Sara Davies, Touker Suleyman, Peter Jones and Steven Bartlett returned ready to invest in the latest must-have items on the market.

And it’s fair to say viewers were taken aback by their budding entrepreneurs on the show after they welcomed husband and husband combo Jordan and Nicolas onto to show to pitch their fitness class business.

READ MORE:Dragons' Den contestant offers insight into BBC show ahead of its return

The dynamic duo, accompanied by their drag queen pal Dunami, introduced the dragons to their one-hour fitness classed titled Drag Diva Fit where customers lose weight by performing some of their favourite drag numbers.

In their complimentary bag of merchandise, the group were each given a banner that had their own hilarious message – including Peter's "mean queen" banner – as well as rainbow fans before they strutted their stuff along the catwalk.

But their original idea failed to blow away the investors, as the Diary of a CEO host tore their pitch apart after business partners Jordan and Nicolas explained most of their profit would come from their products rather than the service.

The 30-years-old businessman said: "This is some of the worst merchandise I've ever seen in my life. That's your logo? You can’t read your name in it."

Naturally disappointed by his criticisms, Jordan said: "This is why we’re coming to you because we’re looking for somebody who has the expertise …" before Steven pointed out: "But you’re charging me £50k to give you my expertise."

It was at this point that Peter took over, as he quipped: "I think Steven’s being a bit of a diva," before he took off his banner and threw it to him, adding: "I think you should have given that to him."

Luckily, his colleague managed to take the cheeky quip on the chin before he moved on with his line of questioning about their business idea.

Unfortunately, none of the dragons decided to invest in the fun-filled fitness class programme and the budding entrepreneurs left the dungeon empty-handed.

But it's fair to say fans loved the drag-inspired fitness class as viewers took to Twitter to share their love for the business plan online.

Another agreed: "I am living for the Dragons doing a drag catwalk! Brilliant [cry laughing emoji] absolutely loved it #DragonsDen."

A third chimed in with: "Something I was not expecting to see tonight – Deborah Meaden voguing through the Den with a drag queen #DragonsDen."