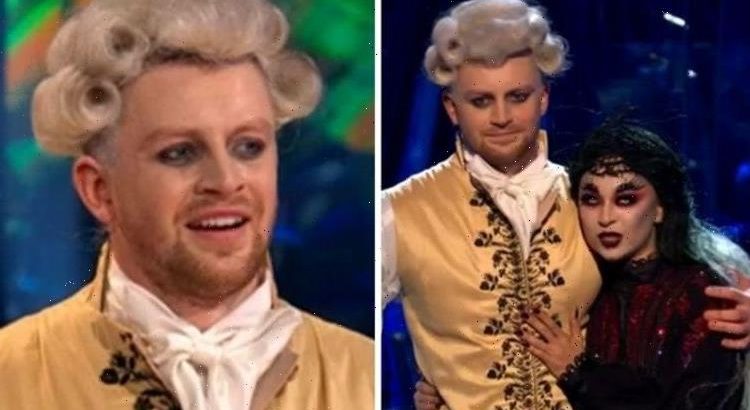 Strictly: Katya 'so proud’ of Adam Peaty after Halloween dance

Last weekend, Adam Peaty and Katya Jones narrowly escaped being eliminated from Strictly Come Dancing after they landed in the bottom two against Judi Love and her dance partner Graziano di Prima. However, following their performance on Saturday, when chatting to Claudia Winkleman fans became concerned as they believed Katya was giving a “goodbye speech” to Adam.

Some viewers felt there was a “hidden message” in the professional dancer’s speech which indicated it could be the duo’s last dance together.

Despite the duo unanimously being saved by the judges, UberKinky’s sex and body language expert, Ruby Payne believes this weekend could be the end of the road for Adam and Katya.

“At the start of her interview with Claudia, it almost sounds like she is recapping their relationship and how they train behind the scenes.”

Predicting their elimination this weekend, the expert continued: “Of course, she could simply be congratulating Adam on how far he has come since their first dance.

“But Katya reiterates her pride several times, which sounds to me like an exit speech.”

Ruby went on to discuss the on-screen chemistry between Katya and Adam when they dance.

“There has been some serious and sizzling hot chemistry between Adam and Katya on the dancefloor,” Ruby explained.

She added: “Their smoking Argentine Tango (a spicy dance as it is) featured an almost kiss at the very end. Perhaps they were too caught up in the moment?

“There’s no denying that there is an almost magnetic connection between the two of them but spending hours together getting close can do that.

“But it’s not surprising that fans have got their beady eyes on this pair, given Katya was previously a victim of the Strictly curse with past partner Seann Walsh.”

Strictly fans also grew concerned about Adam and Katya’s future on the show following her chat with Claudia after their Halloween dance routine.

“It is really tough to start with but the moment something clicks with Adam, it stays,” the professional dancer said.

“So, it’s just torture to get to that click moment but we always do get there.”

Turning to the Olympian, Katya admitted: “I just want to say to you. I think you have improved immensely.

“You have done absolutely tremendously. It was a pleasure to dance with you and he really has done so, so well.”

The bookmakers have also predicted Adam and Katya will be the next couple to leave the show with odds of 13/8.

While 5/2 says Dan Walker will be given his marching orders.

Following closely behind, Rhys Stephenson sits at 7/2, with Sara Davies at 9/2.

Strictly Come Dancing airs on Saturday at 6.45pm on BBC One.