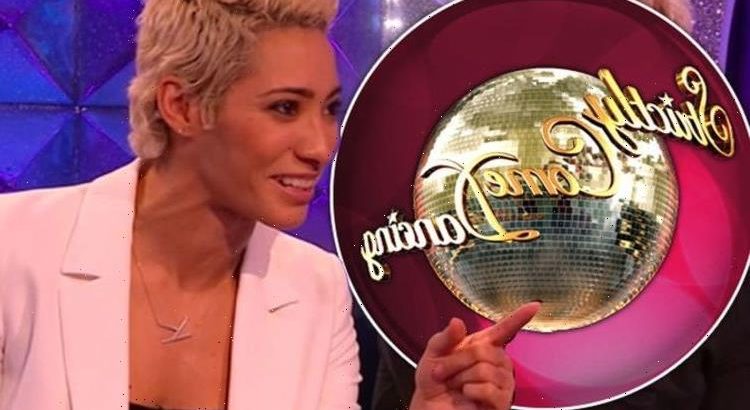 Chris, 35, made it all the way to the Strictly Come Dancing semi-final in 2019 in what was the last post-pandemic series of the BBC show to air. Partnered with Karen, 39, the couple went from strength to strength as they went from the bottom of the leaderboard to finish in fourth place. However, his experience wasn’t plain sailing 100 percent of the time as the comedian has explained what he found difficult when it came to practising and getting to grips with the dances.

Speaking with Express.co.uk, Chris explained: “In week one I got a score of 13 and I was so shell shocked after week one.

“When we got to training, I was like, ‘This is ok. I’m going to be a great dancer. I’m in time and I’ve got the moves and got the costume one.

“And then Bruno [Tonioli] and Craig [Revel Horwood] were [not impressed],” the comedian explained, with his wife Rosie Ramsey, 33, stating she understood the challenges her husband faced.

“If you can’t dance, no disrespect, it’s really hard,” she added, to which Chris praised the cast he was with for taking dancing in their stride.

The father of two did appreciate the support he was getting from the public as he said: “I think the viewers could see I was trying to embrace.”

“And I was enjoying myself,” he explained, adding how even though he would get “angry” for struggling to learn the dance moves, he was still having a great time.

Chris also expressed his gratitude for having Karen as a partner as she was patient with him during training.

“I think Karen could see my limitations quite early on and she just got us to make sure I was enjoying myself.

“The pros on that show deserve medals because they literally give intensive dance [training] but they’ve got to put it in a language in a way that you understand.”

I was so shell shocked

“And I am not musical, I’ve got no musicality. Musicality was a word I learned doing it but they deserve medals for being able to put people through that,” he added.

For Karen to get to the high standard of dancing she has managed to achieve, it was a long path of committing herself to the profession.

Discussing her rise to the stage, the professional dancer explained: “When I was young, I discovered dance and it was a great thing for me.

“When I moved to America, I didn’t speak a word of English so I was trying to adapt to a new country, a new school and a new home, all while speaking another language which was very daunting.”

“Dance became my sanctuary. I got a full scholarship at 10 years old to attend The Martha Graham School of Contemporary Dance where I learned my craft and continued to study.

“Then I went to the High School of Performing Arts – otherwise known as ‘The Fame School’,” Karen continued.

“I majored in ballet and contemporary dance and received The Helen Tamaris Award for Excellence in Dance,” she told Darling Magazine.

The professional dancer joined the cast of Strictly in 2012 and has been a member of the cast ever since.

With this year’s line-up announced, it will only be a few weeks before viewers discover which celebrity she will be coupled with this year.

However, the professional dancer has already shared her thoughts on who she would like to partner with and a female celebrity is on her mind.

The dancer said: “A same-sex partner would be incredible. The support behind Strictly’s first same-sex couple last year was extraordinary.

“I can only imagine our wonderful viewers this year would support it just as much, if not more,” she told HELLO! Magazine.

Strictly Come Dancing is scheduled to return later this year on BBC One.