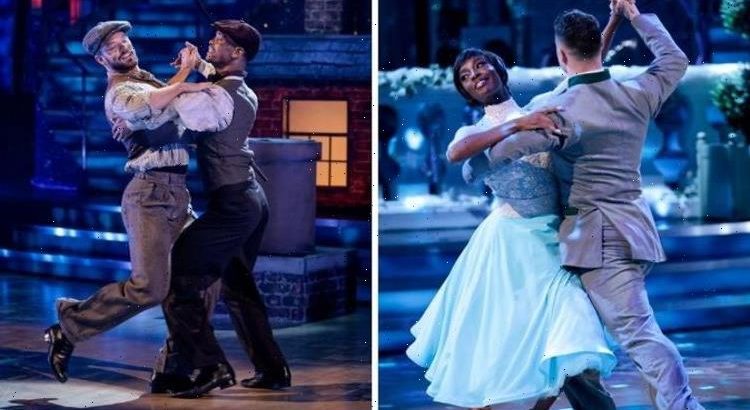 Strictly Come Dancing week 10 will see the remaining six couples perform for a place in the quarter final of the BBC competition. Last week, Tom Fletcher and dance partner Amy Dowden were eliminated after facing Rhys Stephenson and Nancy Xu in the dance off. Tilly Ramsay meanwhile was at the top of the leaderboard with her first score of 40.

Who is top of the Strictly leaderboard?

Tilly Ramsay has continued to improve week on week for the judges and last week scored 40 points.

This week, she will hope to maintain her lead as she takes on the Samba to Levitating by Dua Lipa.

She has been praised by head judge Shirley Ballas for her resilience. She said: “How you come back from being in the bottom to performing like this…

“To be honest, I never say this, but I couldn’t tell who the professional was, that’s how good you were today.”

AJ Odudu has been one of the favourites to win the competition since week one, immediately impressing the judges with her faultless dance routines.

On Saturday night, AJ and dance partner Kai Widdrington will be dancing the Couple’s Choice to Make Me Feel by Janelle Monae.

The star has maintained her top position most weeks, though nothing is certain in the competition.

Rose Ayling-Ellis and dance partner Giovanni Pernice have been fan-favourites of the competition throughout the season.

The deaf actor has inspired fans each and every week, and the same was true for the Musicals.

Speaking to the Manchester Evening Standard, Strictly host Claudia Winkleman shared some of the behind-the-scenes challenges Rose has been facing.

Claudia explained: “She’s a fabulous dancer. The fact she’s deaf comes way down the list of the extraordinariness of the charm of Rose.

“She finds it difficult to train when it’s really raining as it messes with the vibrations in her chest.”

Rose and Giovanni will be dancing the Paso Doble to California Dreamin’ by Sia on Saturday evening.

He and Nancy will be dancing the Waltz to You Light Up My Life by Whitney Houston.

Despite the dance off last week, the pair have consistently scored well with the judges

Initial frontrunners to take home the big prize, John Whaite and Johannes Rabede have fallen down the leaderboard after Musicals week.

This doesn’t mean they are out of the competition though, as they can dance their way back on top during week 10.

The pair are keen to make it into the quarter-finals, but the competition is stronger than ever.

John and Johannes will dance the Argentine Tango to The 5th by David Garrett.

Dan Walker has bobbed and weaved his way into week 10, putting a smile on the judges’ faces as he’s done it.

Despite making it this far into the competition, it hasn’t been easy for the BBC Breakfast host.

Consistently near the bottom of the bunch, Dan knows he has an uphill struggle ahead of him.

In week 10, Dan and dance partner Nadiya will dance the Rumba to Desperado by Eagles.

Strictly Come Dancing continues at 6.55pm on BBC One.