Seann Walsh and Katya Jones’ now infamous kiss was always going to be at the forefront of people’s minds during tonight’s (October 13) Strictly Come Dancing.

And Tess Daly and Claudia Winkleman didn’t shy away from the subject, making it the butt of a sneaky joke at the start of the show. 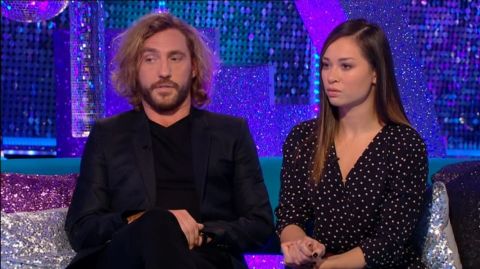 Tess told viewers: “For the last seven days our couples have been eating, sleeping and breathing dance,” to which Claudia replied: “Other than that, it’s been a quiet week.”

Tess then quipped: “Other than the odd headline.”

Just one or two, Tess…

Viewers have been waiting to see Seann and Katya perform, with some Twitters users admitting that they’ve only tuned in because they’re interested in their dance.

The pair are performing a Charleston to ‘Bills’ by LunchMoney Lewis, following rumours that their routine was changed last minute.

It was reported that the couple were set to perform a sexy salsa or tango, but BBC producers apparently made them change it to avoid anything too “touchy-feely”.

In a statement, she slammed the comedian for his “inappropriate, hurtful behaviour” – and said she was keeping their cat.