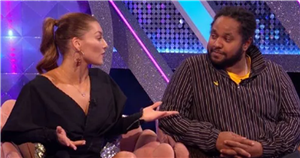 Strictly Come Dancing recruit Hamza Yassin spoken out about his time on the BBC One dance competition, admitting he was convinced he would leave the show on Sunday night.

During Monday’s instalment of Strictly: It Takes Two, the Countryfile star and his dance partner Jowita Przystal shared their feelings on how they felt their performance went during Movie Week.

On Saturday night, the dancing duo performed an impressive Rhumba to the Jurassic Park theme tune, however their routine failed to wow the judges as they found themselves at the bottom end of the leader board.

As they caught up with the former X Factor star on the purple couch, Rylan asked if he had prepared a “farewell speech” ahead of the results show.

It was fair to say viewers were left speechless by the results on Sunday night as hosts Tess Daly and Claudia Winkleman announced Fleur East and Richie Anderson would be performing in the dreaded dance-off.

And no one was more surprised than the beloved wildlife guru, who admitted on the show that he was sure he would be leaving the show after three weeks of bliss.

The TV host asked: “Was there a moment on that results show where you thought, ‘I’m going to go home’?” “I leaned over to Jowita and I was like, ‘Thank you for everything’. You’ll see it [on the show].”

Rylan quickly pointed out: “It sounds like a farewell speech” as the cameraman added: “I was panicking and I know they say it’s in no particular order, but in your brain… there is something there.” Later on in the show, the TV hunk explained that despite how much he loved dancing the Rhumba, he struggled to get to grips with the moves.

His professional partner chimed in with: “I think for the make celebrity, Rhumba is a really hard dance, especially to do it on week three.

“It’s crazy hard, but he took on board all of my tips. He improved his feet, which we were working on all week. “I’m so proud of him because we took on board the comments from the judges on that second week.

“We put them into week three and we’ve got new things to improve and we are going to do it,” she added.