Strictly Come Dancing 2021 star Rose Ayling-Ellis has opened up on the toll her latest dance has taken, revealing that she’s suffered a bruise on her hip from the incredible stunt she and Giovanni Pernice achieved.

On Saturday evening, the couple are set to compete in the semi-final of the series against John Whaite and Johannes Radebe, AJ Odudu and Kai Widdrington and Rhys Stephenson and Nancy Xu.

Rose and Giovanni have proven themselves worthy contenders for the Glitterball Trophy with their stunning routines, not to mention earning high praise for their incorporation of sign language into their choreography and a moment of silence in a dance to celebrate the Deaf community.

Last week, they performed an American Smooth to Natalie Cole’s ​​This Will Be (An Everlasting Love), with one lift featuring Rose leaping into the air before being caught by her partner.

The move absolutely stunned viewers and the judges alike, with the pair recalling how they made the amazing feat a reality during an appearance on It Takes Two on Thursday evening.

While speaking to host Janette Manrara, Rose explained that Giovanni initially showed her a video demonstrating the lift, telling her: ‘I will catch you, just do it, just go.’ 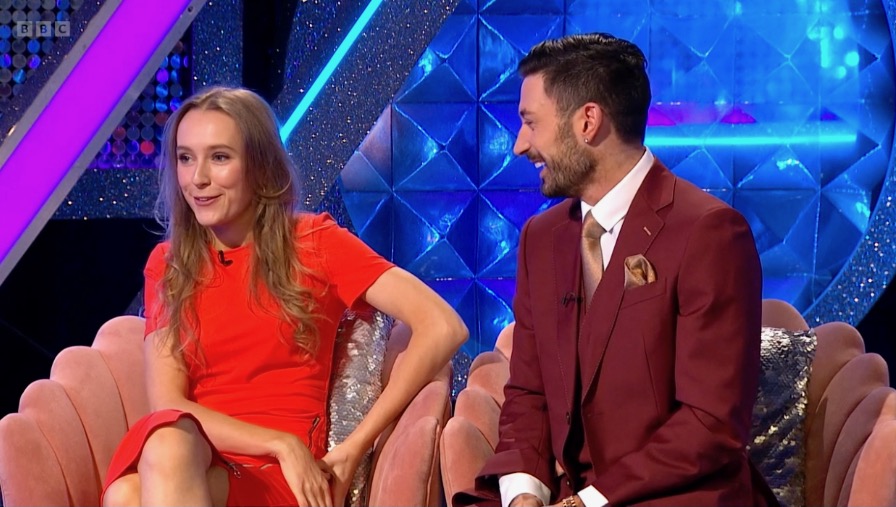 They initially began practising the lift with a mat, but soon stopped when they realised that it hurt more for Rose to land on the mat if she fell, Giovanni said.

He added that there were a few occasions when she landed on the floor.

‘I’ve got a big bruise on my hip,’ Rose said, gesturing to her left side.

She outlined that if she were to fall on the mat, she would bash the left hand side of her body.

However, if they didn’t practise with a mat, it was ‘less painful’ if Giovanni could catch Rose and ‘slide her around’.

‘It’s one of those that you have to nail it. Something can go very wrong if you can’t catch her,’ Giovanni said.

The professional dancer admitted that he was worried that they wouldn’t be able to pull it off right up until the day before the show.

Thankfully, they ended up creating magic on the dancefloor!

Earlier on It Takes Two, Janette caught up with Strictly presenters Claudia Winkleman and Tess Daly, who recollected what it was like in the BBC studio to witness Rose and Giovanni’s history-making dance when a portion of their routine was performed in silence.

‘It was the most incredibly moving moment I’ve ever experienced. I had to go onto the floor after that and I could hardly get my words out,’ Tess said.

‘It was overwhelmingly emotional and you could feel that in the room and beyond. It really felt like a moment. She is going down in Strictly history I think for that routine. It’s just unforgettable.’

It Takes Two returns tomorrow at 6.30pm on BBC Two and Strictly Come Dancing returns on Saturday at 7.05pm on BBC One.