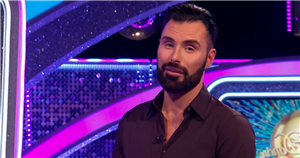 Rylan hit back at his Strictly Come Dancing: It Takes Two co-star Joanne Clifton after she made a cheeky dig at his moves.

The presenter was back on screens on Tuesday (November 22) to present the latest episode of the Strictly spin-off show.

He kicked off proceedings by welcoming former professional dancer Joanne to the program for weekly segment Clifton's Choreography Corner.

The pair discussed Blackpool week and went on to analysis the routines from the the remaining couples.

Helen Skelton and Gorka Marquez performed the Quickstep and Joanne went on to show Rylan the moves in demo time.

She demonstrated the Step Hop Scatter Chasse to Rylan and he copied the dancer.

After Rylan showed off his moves, Joanne said: "That deserved a 40".

However, she said "Not yours, hers."

Rylan jokingly hit back saying: "Not yours hers."

It comes after the news that actress Kym Marsh has been forced to pull out of this weekend's show after it was confirmed she has tested positive for Coronavirus.

The 46-year-old is partnered with Graziano Di Prima but the duo will not dance this week due to strict protocols.

A Strictly spokesperson confirmed the news in a Twitter post which said: "Kym Marsh has tested positive for Covid-19. As a result, Kym and Graziano will not be taking part in Strictly Come Dancing this weekend."

They added: "Strictly Come Dancing protocols mean that all being well, they will return the following week."

On the show's epic return to Blackpool, the Strictly pair danced the Paso Doble to Only Girl (In The World)' by Rihanna and We Found Love' by Calvin Harris ft Rihanna.

Accompanied by supporting dancers, the actress moved fiercely across the dancefloor alongside her partner and the duo were awarded a score of 33.

Despite being bottom of the leaderboard, the pair avoided the dreaded dance-off which instead saw Tyler West and Molly Rainford battle it out to remain in the competition.

And it was the radio presenter that said goodbye after Molly was saved by the judges.