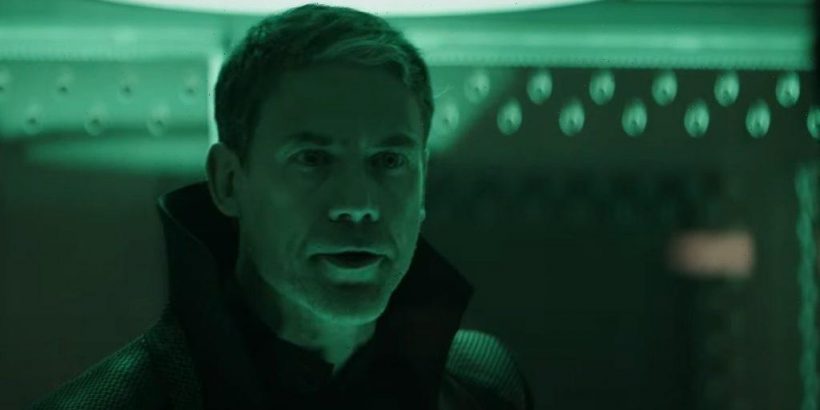 In the latest episode of The CW’s superhero series, Superman & Lois, Clark presses Morgan Edge for information about the dangerous tech designed to revive Kryptonian souls. The villain doesn’t give his half-brother any clues. But in the final scene, he may have revealed what he actually did with the Eradicator.

In the July 20 episode of Superman & Lois, Morgan Edge, aka Tal-Rho (Adam Rayner) is being held in an ARGUS cell in DOD custody. Clark (Tyler Hoechlin) visits his brother and presses him on the whereabouts of the Eradicator.

In an earlier episode, Edge took the machine up into space and hit it with his heat vision. And the device has been missing ever since.

Edge doesn’t give up the Eradicators location. But in a series of flashbacks, he recalls his father’s torturous training. In one scene, he refuses to follow his dad’s instructions, which, as it turns out, are to kill himself to release the Eradicators full powers and revive Kryptonian souls.

In the final moments of the episode, after Edge finds out that Leslie Larr has been captured, he hears voices, notes that his dad was right, and begins projecting blue light from his eyes. He stands up and proceeds to demolish the cell with his new powers.

So what did Morgan Edge do with the Eradicator on ‘Superman & Lois’?

From the looks of it, when Edge took the Eradicator into space, he consumed all of its power. And in order to release its full potential, he would have to die and let it take over his body.

The villain may have been buying time by trying to recruit Kal-El. But after his defeat, he realized his dad’s way is the only one that would work.

So while sitting in the cell, Edge likely let his consciousness go and let the tech take over. This would make him the new Eradicator on Superman & Lois, and it would explain the voices in his head and his new abilities.

The Eradicator is a DC Comics supervillain

Tal-Rho isn’t in DC Comics, and appears to have been created just for Superman & Lois. But the Eradicator on the other hand, has a history in the comics books and has been a formidable foe for Superman.

The Eradicator first appeared in the 1989 comic, Action Comics Annual #2. The villain, which started out as an advanced AI device meant to preserve Krytponian life, eventually morphed into human form and tried to defeat Superman.

The Eradicator has all of Superman’s abilities, including flight, heat vision, and super strength. But he can also project powerful blasts of energy from his eyes and hands and manipulate the thoughts of others.

If Edge is the new Eradicator, he won’t be easy to defeat. Luckily, Clark still has Edge’s crystal. And he may need to use it to get information about the sentient AI from Zeta-Rho.